– Jane also penned a short tribute to the ex-president

Talented makeup artist, Jane Richards, who has gained a reputation for transforming herself into popular figures, has dropped an Independence Day special for her fans in the online community.

To celebrate Nigeria at 60, the self-taught makeup artist transformed her face into that of former Nigerian president, Olusegun Obasanjo.

Like her previous projects, the young lady posted pictures of the processes that led to her finished work of art.

Jane rocked the signature cap and eyeglasses synonymous to the elder statesman.

However, that was not all. The young lady also penned a tribute to the ex-president and recounted how life seemed so much easier when he was still at the helms of power. The tribute reads:

“There was a Nigeria!! Though I was born in the late 90’s but the very first president I remembered while growing up was Chief Olusegun Obasanjo, I remember those days when N10 was just enough for me to get snacks before going to school and I would not complain of hunger.

A bottle of coke used to be N25, ahh, the days of 4 for N5 bubble gum (those hard gums that would give you headaches, pardon me for talking about food only, that’s basically all I knew then.”

See the transformation photos below: 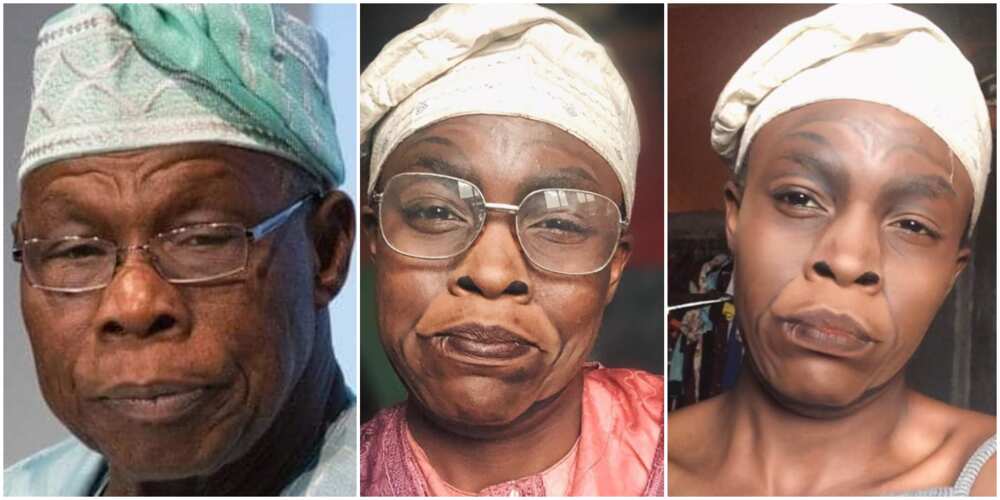 Fans were seen hailing Jane for her creativity in the comment section.

“As an artist, I love your creativity with makeups. I must commend you. As regards this caption, I hope our leaders see it and I hope it makes any sense to them either. It’s my prayer that God heal the nation and the world at large. Nice work and caption dear @jonet_makeovers”

“Your hands are blessed.”

“E be like say God create all images for your face.”

Recall that some weeks ago, Bioreports reported that Jane scored thousands of accolades in the online community after paying a tribute to late Hollywood actor, Chadwick Boseman.

Jane transformed herself into the deceased Balck Panther actor and shared the photos on her Instagram and Twitter pages.

Fans who were in a state of mourning were left impressed with the beautiful tribute.

Nigeria at 60: Cuppy, Arole, Vector, Khafi share their dreams about the country | Bioreports

See what happened to my baby that I delivered at 25 weeks, put in the incubator – Nigerian woman shares photos, video

See what happened to my baby that I delivered at 25 weeks, put in the incubator - Nigerian woman shares photos, video