The Kingdom of Netherlands has returned a 600-year-old smuggled Ife terracotta antiquity to Nigeria.

Nigeria’s minister of information and culture, Lai Mohammed, was presented with the antiquity in Abuja on Thursday November 26, bioreports reports.

According to Mohammed, the antiquity was smuggled through the airport in Ghana before getting to Europe in 2019. 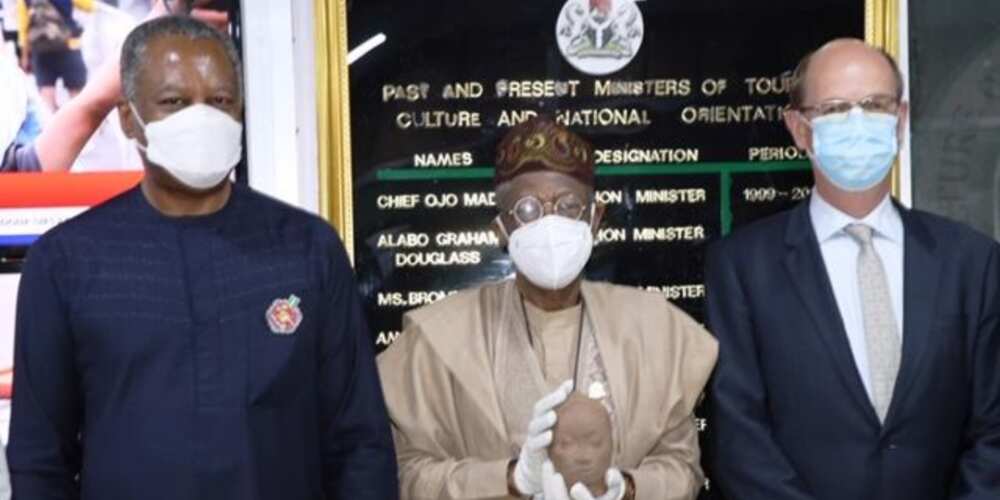 The minister of information and culture, Lai Mohammed, was presented with the terracotta on Thursday, November 26.
Photo credit: PM News
.

Mohammed said forged documents purported to be from a former director general of the National Commission for Museums and Monuments were presented by the smuggler.

According to the minister, the Dutch Customs at Schiphol Airport suspected that the object might be illicitly imported and alerted the antiquity protection office.

In an earlier report by Bioreports, Mark Walker announced his readiness to return back to Nigeria the items his grandfather stole from the West African country.

Recall that thousands of items were stolen from Nigeria during a British military expedition in the late 19th century.

Walker’s grandfather, who was a soldier, took part in the looting of Benin City in the late 19th century. Bioreports gathers that Walker’s grandfather was in his twenties when he brought the artefacts back on his return to the UK.

Bioreports also previously reported that artefacts which were allegedly stolen from Nigeria were put up for sale in Paris with one of them going for as much as $1m (N380m).

Christie’s house auctioned the ‘stolen statues” which Nigerian officials claimed were taken during the civil war in the late 1960s.

This was after Nigeria’s National Commission for Museum and Monument asked that Christie stop the sale of the artefacts collected by art dealer and adviser of late French president Jacques Chirac.