Just in: Okada riders currently on rampage in Lagos, clash with taskforce

– Okada riders have blocked Ikeja along road in Lagos

– Nigerians have however reacted to the development, urging police to maintain status quo for now

In what will come as a surprise to many people, given the just ended EndSARS protest, commercial motorcyclists are on a rampage along Lagos Abeokuta-Expressway, by Ikeja along area.

They have barricaded the road with a bonfire, protesting what they described as indiscriminate arrest and impoundment of their motorcycles by men of the Lagos Taskforce on Environment and Special Offences Unit.

Bioreports also reported that the riders protested in Festac area at the popular Apple Junction, in Amuwo Odofin local government area of the state on Tuesday, November 17.

The riders blocked certain roads in Festac Town after policemen and taskforce officials conducted a raid and seized many of their motorcycles.

Bioreports correspondent was on ground to cover the Festac protest.

Meanwhile, Nigerians have taken to social media to react to the latest development. 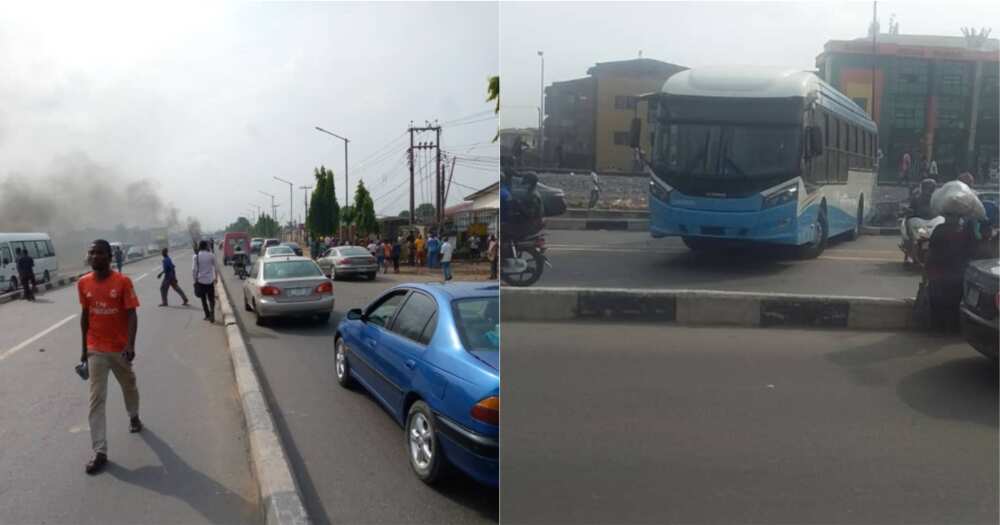 “Since the government has turned graduates into Okada riders, won’t they eat and provide food for their families? Since the government refused to provide/create jobs for the youths, please allow them to do their job, that is their only means of survival. May God punish bad leaders!”

“You can imagine how things change so fast. The one-time powerful people are now being reduced to fearful beings…and the people indeed have been pushed to the wall till they are left with no option than to summon the courage and chase after the one time fearless who is now becoming more fearful.”

“This government don’t know that Endsars protest is a game-changer. Nobody fears any government or police anymore. Power belongs to the people.”

“Things fallen apart. The government can’t hold the country together with the situation of things.”

“There are hunger and anger in the land, so what do you expect.”

“For now, let government agencies maintain the status-quo till further notice, to avoid further break down of law and order.”

Meanwhile, Bioreports had reported that Eromosele Adene, one of the advocates of the EndSARS campaign has been granted bail by a magistrate court in Lagos

The Yaba magistrates court on Tuesday, November 17, set the bail at N1 million.

EndSARS: Are you willing to join another round of protests? | Bioreports

As a man, if you don’t have N25m in your account, stay away from relationships: Nigerian lady drops dating condition

As a man, if you don't have N25m in your account, stay away from relationships: Nigerian lady drops dating condition