An elderly Nigerian woman has got people talking after she did the unimaginable to a driver who refused to give her and other passengers their balance.

In a video that was shared on Twitter by @iamprofstar, the woman hijacked a big commercial bus and people gathered to behold the spectacle.

According to @iamprofstar, the woman hijacked the bus because the driver failed to drop his passengers at Orile bus stop along the Lagos-Badagry Expressway and refused to give them their balance. 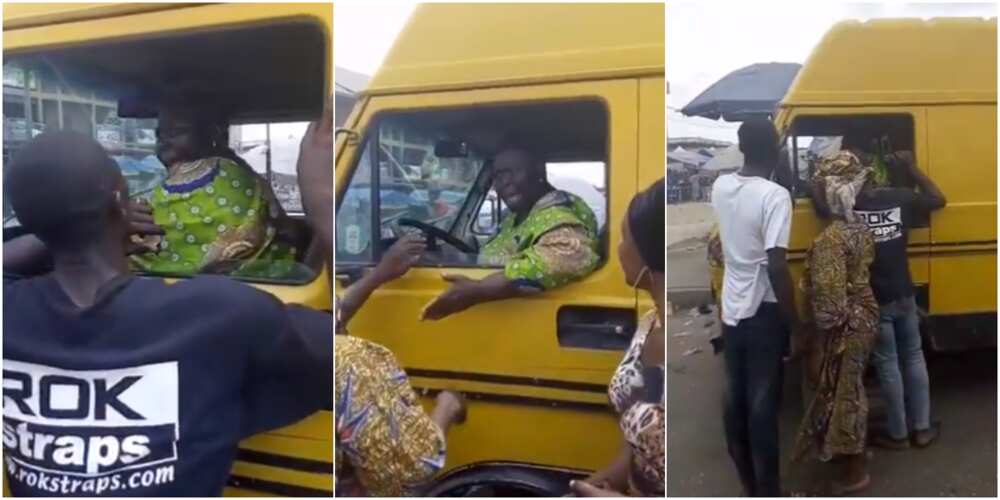 The elderly woman caused a scene at the bus stop as onlookers beheld the spectacle.
Photo credit: @IamProfstar
Source: Twitter

Tweep with the handle @HRMaphrodiety wrote:

“Give her that key right this minute, she needs to get to her destination stop playing with her.”

“Lol…The lifestyle in Lagos has turned almost everybody in the State to abnormal person.”

“The woman said the driver should bring the key; she wants to drive the bus away..”

“It’s not easy to be normal in Lagos. Those danfo drivers can be annoying.”

In a previous report by Bioreports, a screenplay writer identified as King Kelvinson took to his Twitter page to share a personal experience he had in 2019.

According to him, the experience made him have a rethink about life. Narrating his experience, King said that he alighted from a bus in 2019 and wanted to pay the driver. The actor stated that the driver rejected the money and told him not to bother.

Surprised at the kind gesture, King said he took a closer look at the driver and then realised that it was his classmate. According to the screenwriter, when he got home, he started pitying his classmate.