Thiago Silva will be returning home to see his home being decorated with Christmas trees and lights courtesy of his beautiful wife Belle.

The Chelsea defender was on international duty for Brazil and was part of the wins in their CONMEBOL World Cup qualifiers against Venezuela and Uruguay.

Belle paid a company who specializes in Xmas decorations to transform their home in London ahead of her husband’s return after almost two weeks away. 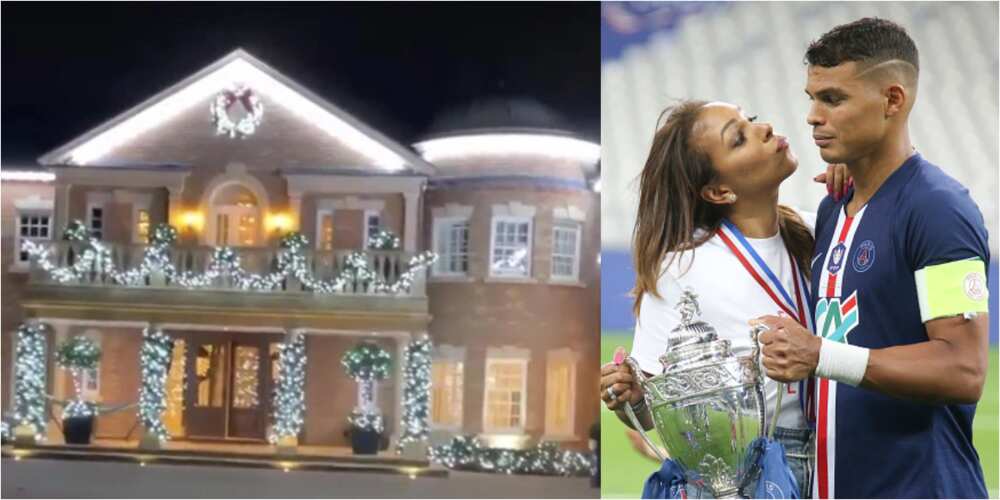 The mother of two boys was excited with the outcome and shared series of videos on her Instagram handle.

The Silvas’ home now has incredible lighting and other types of decorative features that signifies the celebration of the birth of Christ.

The house now has three major colors including red, green, and gold as well as a sea of lights, wreaths, runners and a giant Christmas tree.

Belle revealed to her 400,000 followers on Instagram that she was scared their home would end up looking like Santa Claus’ house.

Brazilian outlet O Globo translated her post from Portuguese to English which said:

“I was afraid it would look like Santa Claus’ house.

“I didn’t want to put a lot of things and I thought it was simple.

“Now, I want animals lit up here, a very big Santa Claus at my door.

“But it is beautiful, the way I wanted it at first. Very clean, very chic.

“This decoration was the way I wanted it.

“I didn’t want anything very fanciful, despite being a little bit just like a movie, but I’m loving it.

Meanwhile, Bioreports had earlier reported that Georgina Rodriguez is set to put smiles on the faces of children in Madrid during a visit to child protection NGO Nuevo Futuro.

The stunning model left her base in Turin in Cristiano Ronaldo’s Gulfstream G200 worth £20million to hand Christmas gifts to children in Madrid weeks before the day.

The 26-year-old has been working with the organisation for the past three years and played the role of Santa Claus in 2019.