– Ismaila Surajo, a maker of mini tractors and other farm implements, has called on the federal government for help

Ismaila Surajo, who is fabricating mini tractors and other farming tools, has appealed to the federal government for support to enable him to deepen his knowledge for higher output.

The indigene of Rubochi in Kuje area council of the FCT, said he needed support to deepen his knowledge in engineering.

The News Agency of Nigeria (NAN) reports that the young ‘engineer’ made the appeal at the ongoing 2019 Abuja International Trade Fair where he showcased his Made-in-Nigeria tractor, excavator, truck, train among others.

According to Surajo, it took him two years to manufacture the tractor which can be used to convey farm produce.

“I started manufacturing different things since 2005 while I was in primary school, using condemned cartons, then aluminum and iron which I sourced locally from scrap vendors – Babanbola.

“I also refurbished second-hand engines obtained from motorcycles to construct the tractor which you can start manually or by dialing its number on a mobile phone wherever you are for security reasons.”

Appealing for government intervention for him to achieve his aspirations, Surajo said he has been fabricating farm implements and other items without any form of intervention from any government agency.

He added that he was encouraged by the enthusiasm and support of commercial motorcyclists who contributed money for him when he first displayed the initial toy equipment he built.

Surajo expressed the hope that the Abuja international trade fair would bring him to the limelight for his talent to be harnessed for national growth.

Speaking with NAN, Nathan Pawa, director, Technology Business Department, Nigeria Agency for Science and Engineering Infrastructure (NASENI), said Surajo could use the agency’s platform to put his knowledge to practice.

Pawa, however, said what Surajo required now was to further his education. 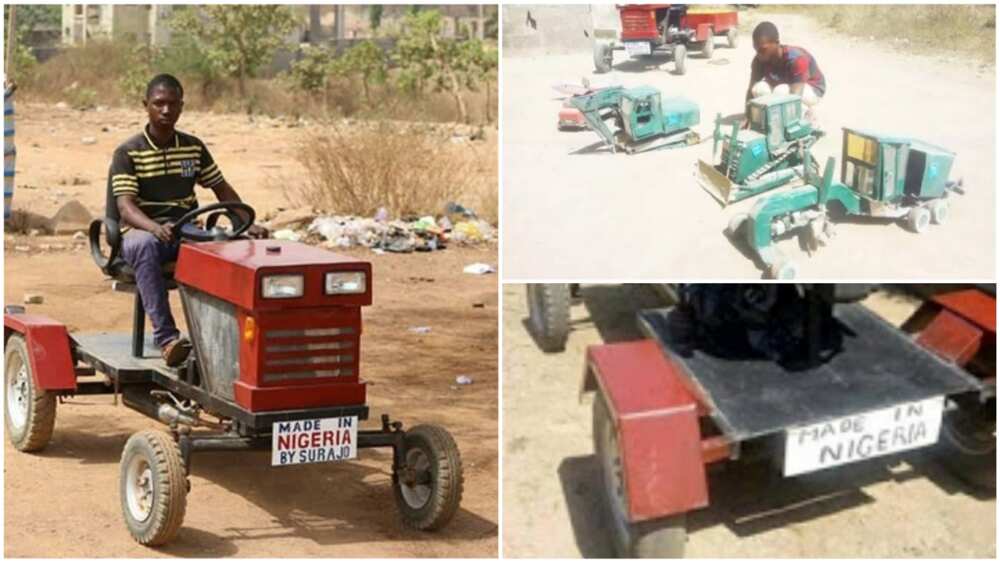 “He has succeeded in putting together what is affordable within his environment, when such talents are discovered you now take them in and expose them with education, infrastructure and facilities to use with application of his knowledge.

“The agency is focused on promoting raw talent and made-in-Nigeria products; at this age, the young manufacturer could not be employed rather needed volunteers or intervention to sponsor his education.”

The company, Ephraim and Jeoana Akwiwu Auto Shop, launched the car in Owerri, the capital of Imo state.

It should be noted that Alex was trained in Europe as an automobile engineer. He is also the CEO of the company that built the IYI Celebrity.