– The man earlier offered to be his shoemaker, asking the VP for an opportunity to meet him and showcase his works

A young Nigerian man with the Twitter handle @Ojbest5 has got the attention he really wanted after tweeting at Vice President Yemi Osinbajo saying he will like to be his shoemaker.

In the said tweet, the man also told the vice president he will like to meet him and show him the kind of shoes he makes.

Weeks after his initial tweet, Osinbajo sent delegates to inspect his shop and take a look at his product.

In reaction, the Nigerian man said that he feels overjoyed that the Nigerian second citizen would respond to his Twitter post. 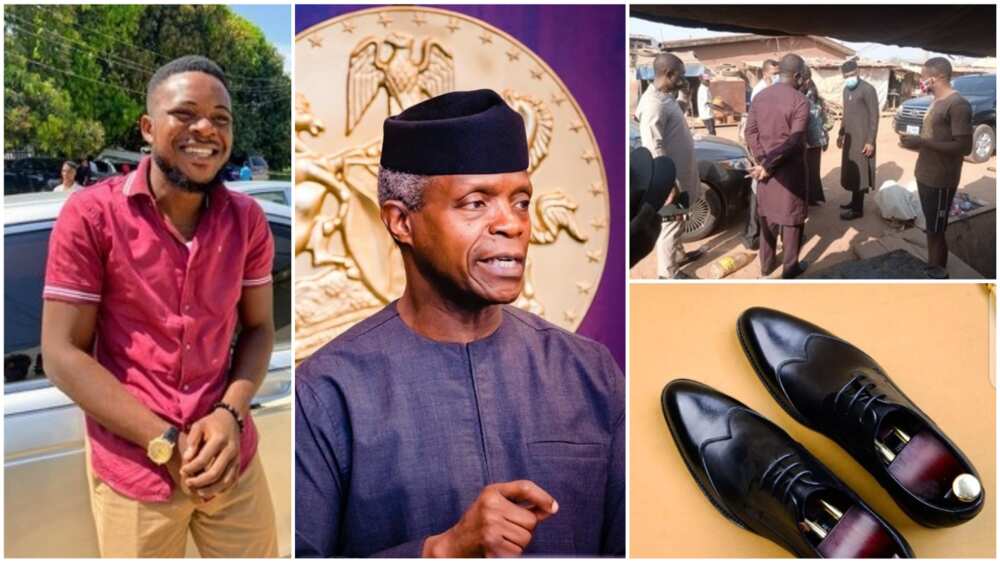 A young Nigerian man got Osinbajo attention after marketing his shoes to him.
Photos sources: @Ojbest5, Yemi Osinbajo
Source: Twitter

According to @Ojbest5, there were long conversations between him and the representatives as he said that that a “lot of promising things are coming” his way.

This was the initial tweep the got the VP’s attention:

Below was the post he made after the august visit:

Many Nigerian have gone under his tweet to congratulate him for the attention he got for his business.

Bioreports compiled some of their reactions:

“Although your beginning was small but at this stage you are greatly increasing. A testament to Osinbajo’s “Economic Sustainability Plan currently being implemented, has been an openness to new creative ideas. A proof that Made In Nigeria is better, to grow our economy.”

“Congratulations! I can’t imagine how happy you are when u saw those guys. This is a small thing compared to when God will open up d doors of success He has for you. Keep up d good work! Stay out of controversial issues!! Own your voice!!! Be consistent & persistent! C U @ d top!!”

Meanwhile Bioreports earlier reported that just when you think Nigerians have reached the limit of their creativity, stories like that of Favour Oluma, a young lady, amaze you anew.

The young Nigerian lady is into the craft of converting old car tyres into grand tables that can fit into any modern home.

A student of the Federal University of Technology, Minna, she could be seen in the production process of the table in one of the pictures she shared on Twitter.