– In the letter, his niece expressed gratitude to him for showing her all the love her father couldn’t give her

– Many have showered encomiums on the uncle for his kindness, while others feel the letter is the handiwork of the poster

Often times than not, it takes only acts of kindness to change a person’s life. An uncle has affected his niece in this manner.

A Twitter user has shared the emotional letter his young niece left him before she left for school. The uncle @Uncle_Abs posted the shot of the handwritten letter along with love and crying emojis. 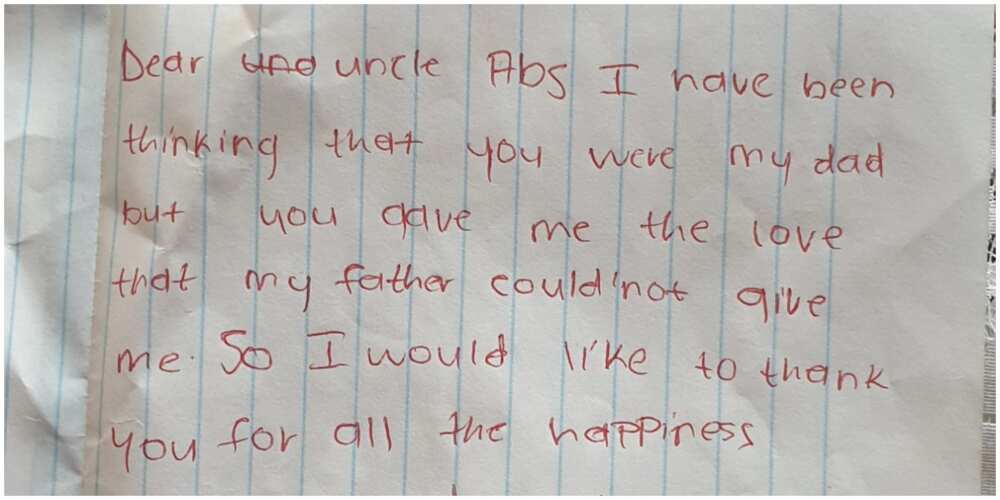 In the letter which has gone viral, the unnamed young niece revealed that she had always thought her uncle, who she referred to as Abs, was her dad by reason of how he took good care of her.

She went on to appreciate him for all the kindness he has shown her and ended the heartwarming letter with an ‘I love you.’

The tweet which had already garnered over 37k likes got an outpouring from tweeps.

“A parent isn’t just a person who biologically birthed someone but also a person who nurture someone; Truth be told in some cases, friends & strangers show more love than one’s imidiate family. Being genuinely loved by one’s family & friends despite one’s flaws is priceless.”

“Bless your heart uncle Abs. Not many uncles step up to the challenge of assuming supportive parental positions in children’s lives. May you inspire many uncles out there.”

“How old is your niece?

“She’s having a grown up handwriting.”

Meanwhile, Bioreports earlier reported how social media reacted as a Nigerian lady shared screenshot of message a delivery guy sent to her.

In the screenshot, the man appeared to have started the chat on Whatsapp. He told her that she left him in a ‘high mood’.

According to the man, @biglilbaby_1 turned him on and made him feel things he has not felt in many years, much to the amusement of the lady.