Young man narrates how a disabled barber gave him the best haircut of his life, shares adorable photos online

– According to the man, he at first wanted to decline his request for a hair cut but decided to go ahead with it

A Ghanaian Facebook user, Oheneba Paa Kwesi Kissi, has shared a story of an encounter he had in a barbershop when he went to get a haircut in the Bono East region.

In a long post made on Facebook, Kissi indicated that he decided to get a haircut and walked in to meet the disabled young man.

Kissi continued that from all indications, it was clear that it was going o be the disabled man who was going to give him the haircut. 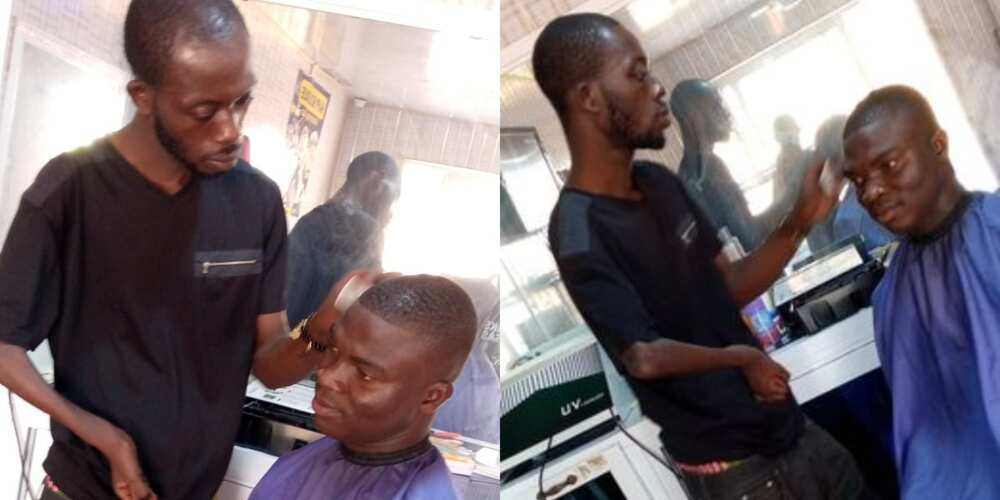 Young man recounts how disabled barber gave him the best haircut of his life. Source: Facebook
.

He revealed that when he came to the certain conclusion, he wanted to just forget about looking dapper and just pay for no service rendered.

But on second thoughts, Kissi decided to see what would happen if he gave the disabled barber a chance with his head.

To his surprise, the disabled barber did a very good job which left Kissi greatly surprised and impressed at the same time.

Out of the gladness, Kissi indicated that he would have loved to help he barber do something more than just cutting hair but he did not have enough capital to help out.

Kissi urged people to lend a helping hand to people with disability.

In other news, a person’s craft would always speak for him where he may never imagine; it’s louder than a voice even. This could be said of a young man from Oyo state whose styling skill broke the internet.

The young Nigerian man with the handle @Topzycut posted on Monday, August 31, that he wanted his craft to go viral.

Reactions as this little girl adores mom, tells her she is beautiful (see video)