A young man has left social media users awestruck and amazed as he shared a pencil painting he had made for former English and Arsenal football star Ian Wright.

The talented painter took to Twitter – with the handle @SamIsArtGaller1 – to share the breath-taking artwork and got tweeps talking.

While the actual football legend Ian Wright the artwork was meant for has yet to respond to the drawing, @SamIsArrtGaller1’s work has continued to get positive reviews and remarks from far and near. 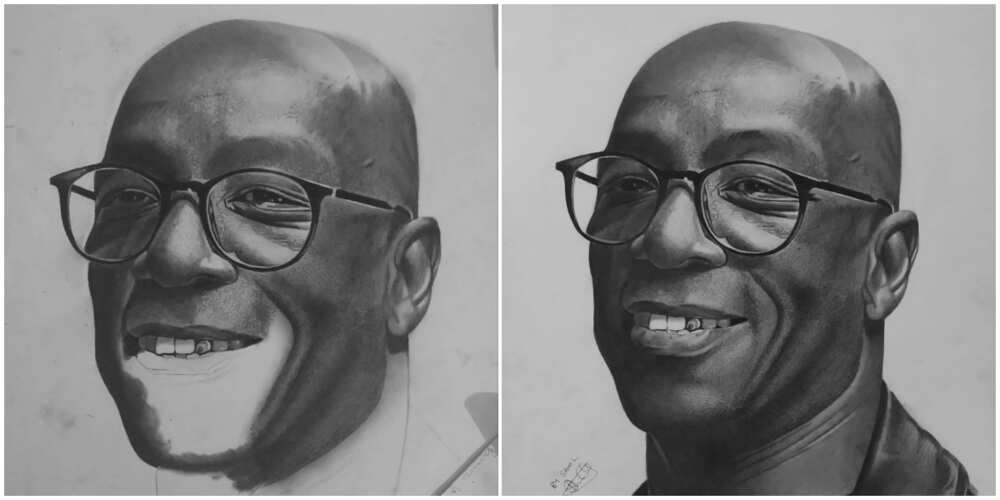 Interestingly, his talented display caught the eye of Charles Watts, a United Kingdom based TV personality who happens to be an Arsenal correspondent.

Charles Watts retweeted the drawing and described it as superb, an act that surprised the young artist.

“Thank you so much @charles_watts for sharing my work and helping it reach @IanWright… You’re class. I really appreciate.”

A quick scroll of his timeline showed he has made several similar pencil paintings of popular personalities around the world.

Meanwhile, some comments that greeted the pencil drawing are highlighted below:

“Wow, good work tbh! I’m not retweeting since I have no followers but really admired your work.”

“That is just amazing, what a talent.”

Meanwhile, Bioreports earlier reported that a Nigerian boy who painted Kevin Hart was recognized for his talents by the American actor.

Given the fact that he was totally impressed by Eli’s hyper-realistic painting of him, Kevin took to his Twitter page to gush over the portrait in several tweets.

In a tweet to the young artist from Kaduna, Kevin promised to pay for the portrait once it was delivered to him. Then he also said he would contract the boy with a job to draw three other celebrities which he would be paid for!