– Inside the bus is well arranged, with a passage created to allow customers free movement without running into each other

A young man has taken creativity to a whole new level as he transformed his luxurious bus into a cool restaurant.

Sharing photos of his creation, a Twitter account with the handle @KasiEconomy said he made the conversion for the purpose of starting a fast-food restaurant.

In the place of passengers seat, the man fixed plastic chairs with a long slab that served as a table.

A section of the bus was converted into the kitchen where meals are served. At the midsection of the vehicle, there is a door that segmented the bus into a kitchen and customers’ corner.

It should be noted that Bioreports has not independently verified the photos at the time of writing this report.

See the photos below:

The post about the mobile restaurant has gathered over 57,000 likes with many quoted replies. Bioreports compiled some of the reactions below:

“Even the make of the bus is above 15m in Nigeria.. so it takes capital to enjoy such.” 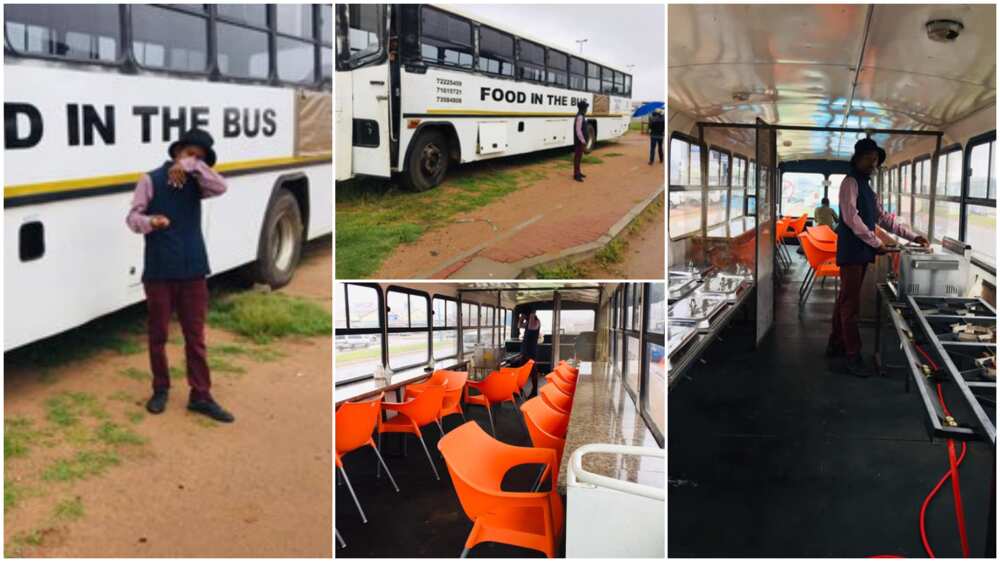 People described the man as smart with the way he re-thought the idea of a restaurant.
Photo source: @KasiEconomy
Source: Twitter

“This is well-thought-of. The bus is not moving. Safety protocols should be considered.”

“I doubt if the bus will be moving while serving. I believe it will only move to park at a particular venue for customers to buy and eat there. Besides, this isn’t new naa..to those surprised.”

Meanwhile, Bioreports earlier reported that a 10-year-old boy identified as Micah Idris displayed that he is on his way to becoming a successful entrepreneur.

The young entrepreneur, who sells lemonade, recently acquired an old school bus to transform it into a food truck.

The Philadelphia native was able to achieve this with the help of people who donated to his business after his mother started a fundraising campaign for him.