– The unique creation was tested much to the amazement of the watching crowd, some of who took turns to ride it

A creative young Ghanaian local engineer has stunned many people on social media with his invention of a rare vehicle that can be called a tricycle.

In photos sighted by Bioreports on the Facebook page of Richard Akoto Darko, the special tricycle was posted for the whole world to see.

The story that came with the photos had it that the creator of the vehicle was from Jasikan in the Oti region of Ghana. 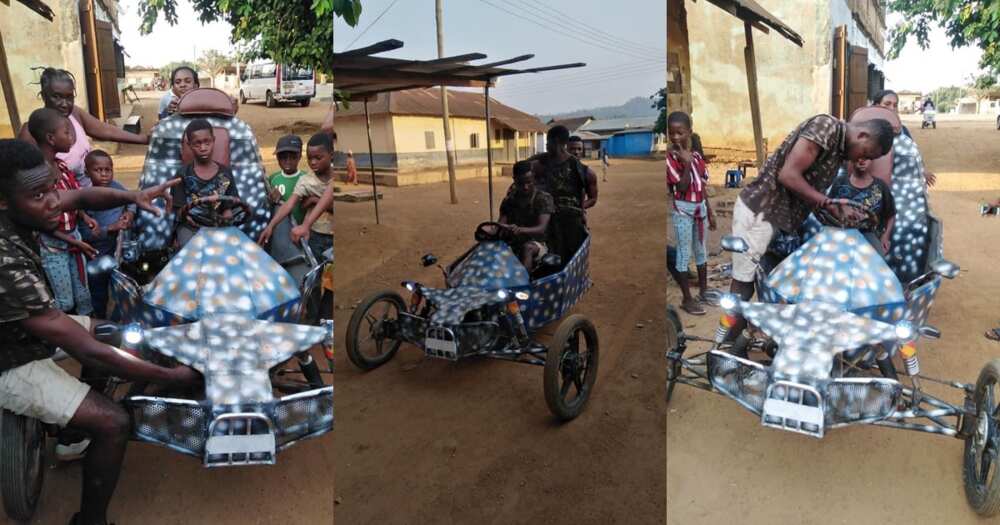 In the photos, the creator of the vehicle whose name is yet to be known had come out for a test run of his creation.

It appears the exercise caught the eyes of many who rushed to have a closer look at the invention and some people even had the chance to ride in it.

The inventor was seen in the driver’s seat as he carried a woman on the passenger seat. Looking closely at the invention, one can see that it has the features of a convertible car and that of a motorcycle which makes it a very rare creation.

After Richard Akoto Darko made the post, he captioned it:

“This great work was done by an automobile guy at Jasikan in oti region.

Meanwhile, Bioreports had earlier reported about a Nigerian teen Kensmith Rechiel who built a single-seater aircraft, 2-seater sea boat before he turned 18.

Kensmith explored his creative abilities and talents at the age of 7, and it will be safe to say the sky is the starting point for him.

At the turn of 16, he had built an RC scale airplane that flies which he called “Donko King”.