– Social media users have praised her for it, some say she shouldn’t have brought it to the media

Congratulations are underway for a yet-to-be identified mother as her daughter is set to gift her a house.

Taking to Twitter on Monday, February 15, a young lady named Ntando Duma Mthomben wowed tweeps with photos of a house she said she built for her mum.

The South African media personality, however stated that construction works haven’t been completed on the house. 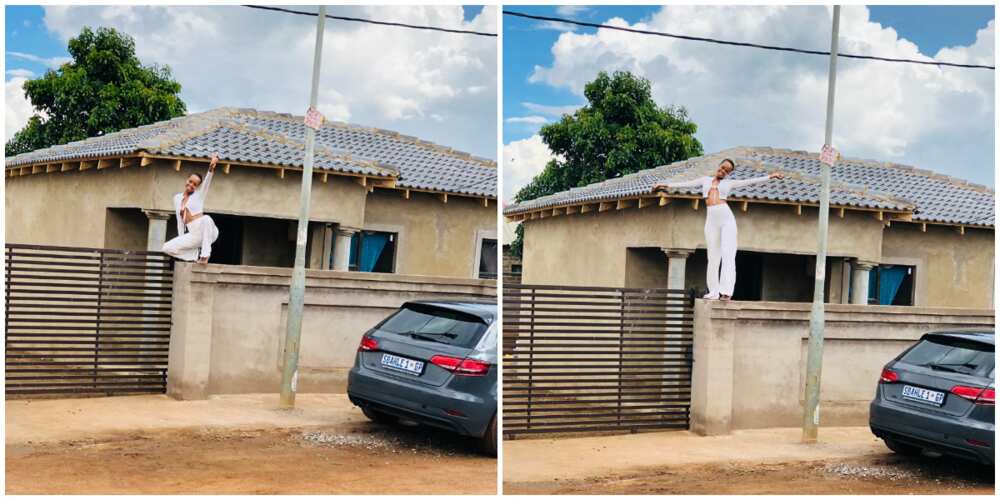 Mthomben struck a rather risky pose on top of the entrance fence to celebrate herself.

The viral tweet with over 57k love reactions caused an uproar on Twitter. Some persons took to the comment section to sing their own praises of kind deeds they have wrought for their mothers.

A section of tweeps opined that it was uncalled for to showcase what she wants to gift her mum on social media.

Bioreports have compiled some reactions below:

“Can we do things and not post about them?”

“Especially for our parents. The way people use their poor mother’s for cheap likes on this app. I mean, you could at least include her on the pic then.”

“Congratulations for building a house for your Mum. My elder sister bought a house at Alberton for my Mum but my Mum rejected it to this day for no reasons & they are not in good terms with my sister.

“Your Mum should be proud of you.Very few people are doing what you are doing.”

“Is not like i’m jealous or wat but was it really neccessary to tel us that you are building your mom her dream house.”

Sharon Beverly said she fulfilled a promise she made to her mother of building her a house and though it was simple, she was still proud of the results.

Taking to Facebook, the young lady disclosed she had spent KSh 130,000 (N454,017.40) in constructing the house and she was hoping that she would plaster it soon.