– The young man, who was only identified as @pipozaire06, decided to show appreciation by upgrading his grandparents’ house

– He posted snaps of it online and inspired South Africans, whose hearts were touched by his kind gesture

Grandparents truly are a blessing and one young man decided to thank his for taking care of him and his siblings.

On Wednesday, September 23, the graduate simply identified by his Twitter handle @pipozaire06 shared photos on the social media platform showing how he thanked his grandparents for their unconditional love.

@pipozaire06 decided to show his appreciation by giving their home a facelift. He captioned the post:

“Gave my grandparents’ home a facelift… Easily a love letter to them for giving me and my siblings unconditional love.” 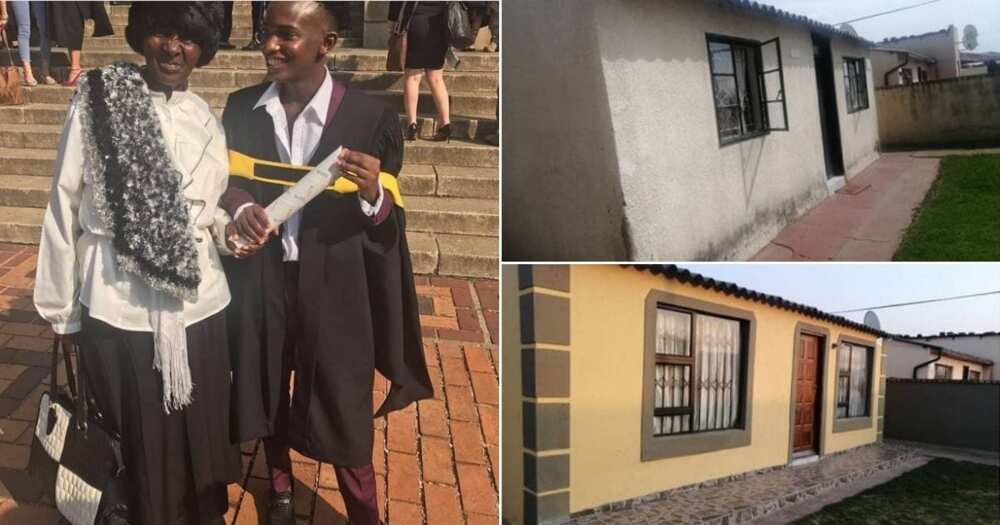 A young man gave back to his grandparents by giving their house a facelift. Photo: @pipozaire06/Twitter.
.

Thousands of South Africans were inspired by the post and they applauded @pipozaire06 for doing something sweet for his grandparents.

“All kinds of proud. If you was up to me, men will he judged on how well are they looking after their parents or in this case grandparents. It’s very difficult to explain Gold R is abazali behluphekile.”

Phile Dale, who goes by the handle @phile_diale1, wrote:

“Ncooh this is so sweet! Wishing you nothing but blessings! She must be proud of you.”

“Argh I love this so much for you and them! We really have so much to celebrate!”

“Dude this made me cry this is life my friend may God bless you.”

In other news, indeed, slow and steady wins the race sometimes, and this is reflected in the short but beautiful story of a Nigerian dad who recently completed his house.

His son, identified as George on Twitter, wowed many internet users when he took to the platform to share photos of his father’s new house.

Should a ‘homeless’ man move into a house built by his wife? (Nigerian Street Interview) | Bioreports

Buhari and I haven’t spoken since Lekki shootings – Sanwo-Olu

Why we can’t speak on Lekki shootings – DHQ