– A woman, Luyanda Mafanya, took to social media to show off her new baby

– Mafanya shared photos of the Ford vehicle she purchased for herself

Social media influencer Luyanda Mafanya, who is known for Cooking with Luyanda, finally got the car she has been working hard for.

“Hey guys! Please meet my baby Ntebaleng. If you have followed me long enough, you know how long I’ve been waiting for her!” 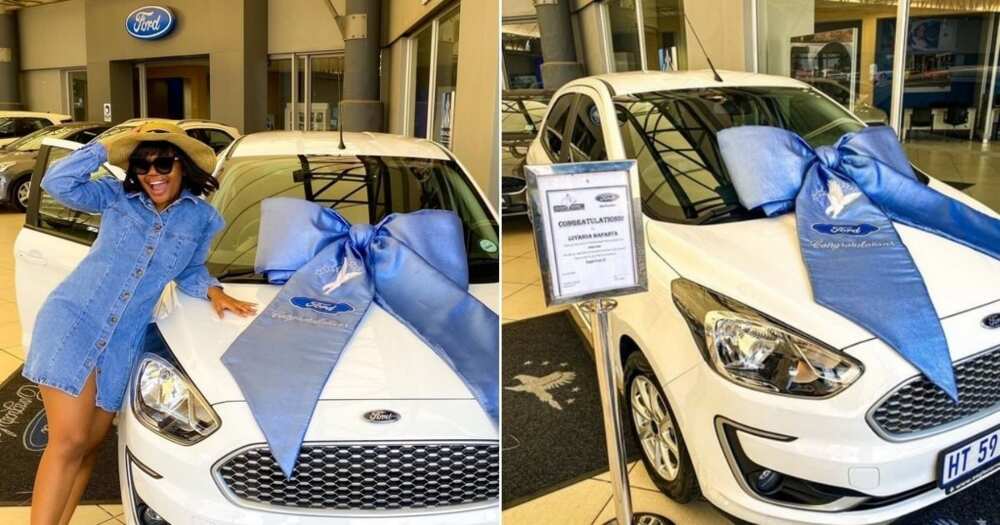 Luyanda Mafanya showed off the new car she bought for herself online, inspiring many social media users. Photo: @Luyanda_Maf / Twitter.
.

The post gathered over 12 700 reactions and Mafanya’s followers congratulated her on the new car.

“She’s beautiful I’d like to be her step dad.”

“Beautiful! Ah I am so happy for you! Well done honey!”

“This is flipping incredible. I absolutely love seeing the things we tweet about manifest. Well done babes.

Meanwhile, Bioreports earlier reported that a Nigerian billionaire businessman, Femi Otedola, recently served serious daddy goals with his recent move for his three daughters. The billionaire who is no doubt a doting father recently went shopping for his daughters and splurged millions of naira on fast cars for them.

Otedola purchased a Ferrari Portofino for each of his three daughters, Temi, Tolani and DJ Cuppy. A 2020 model of the fast car reportedly costs about $215 000. The Ferrari’s came in different colours that seemed to suit the personalities of each daughter.

The excited girls took to social media to share photos of their father’s gifts to them as they celebrated.

In other news, a Nigerian father, Oluwadamilare Dauda, said that though he is not Otedola, he got bicycles for his two daughters.

In his tweet on Wednesday, September 16, the young man said that Ferrari is loading as a show of faith in the things he could do more if he were as rich as the billionaire father.

Igbo women are the most romantic women in Nigeria – Lady claims, sparks serious debate on the internet

Igbo women are the most romantic women in Nigeria - Lady claims, sparks serious debate on the internet

Victor Ola, has been supporting people to join him in Canada since he relocated over a decade now. He has...