A GOOD nanny is a parent’s dream. A good nanny, though, can overthrow the parent. That provides a dilemma for a home. But, more so, in the running of a country.

A government as nanny captures the imagination. When we encounter novels like the Perfect Nanny by a French Moroccan writer Leila Slimani or The Help by Kathryn Stockett, we wonder what a mother-surrogate who thrashes about the cot and kitchen has in common with politics.

The nanny state, first advanced by a lawmaker Lain Macleod in Britain in 1965, is another way of saying we should choose between a state of affection or the one that leaves citizens to their devices. But no state can be free from the nanny’s apron.

The nanny state is a welfare state. It spreads its benevolent bosoms over the suckling citizen. In a country like Nigeria where the needs are many, the state should play nanny. And for good reason. But not an absolute nanny. We expect the nanny in special places. We expect such a nanny to be a good one, or else the nanny will unleash a maleficent soul like in the novel Perfect Nanny about a so-called happy family. Things go awry and the children choke. Murder suffocates affection.

The Buhari administration was born not sure whether it wanted to play the nanny or the aloof parent. It has managed to do both, but unmanaged it. It has left the child at once panting for the nanny and the parent. A Hobson’s choice. A riot of a vision.

In a country, the state provides infrastructure, security and resources. The parent does that, too. But in a nanny home, the parent does not exude empathy and intimacy. They cannot give the routine joy and play for the child. They are aloof, swum away to workplace avarice. The parent cedes their seed to the maid.

It reinvigorates the debate as to how much of government we need in our lives. Abraham Lincoln asserted that governments should do for the people what they cannot do or cannot do so well for themselves. Lee Kuan Yew boasted that if he did not run a nanny state, his country would not have leapt ahead. It draws the charge of a despot. Hence we have a democracy after many years of gun-handed mulls on the throne.

A state plays nanny when it builds roads, bridges, secure army and railways and schools. Dinner table steams with food, the sick get drugs, the jobless work. The nanny state is the capitalist antidote to the smothering blanket of a socialist state. it is a Fabian ideal free of Lenin’s shackles.

Under Buhari, we see two things working quite well. Work is going on for the Second Niger bridge, the Lagos-Ibadan expressway and many restored bridges across the country. We also have witnessed the Lagos-Abeokuta-Ibadan railway project on the verge of formal commissioning. These are the doings of two work horses. One is the Trojan of works, Babatunde Raji Fashola, SAN, and for transportation is Rotimi Amaechi.

Nobel laureate Wole Soyinka made a subtle point recently in his commute on the train to Abeokuta. He said he loved the train but he was not ready to speak about Buhari. It looks like a disconnect, but it is not. The bard was like the child who loved the nanny but is alienated from the parent. Of course, Buhari will take the credit for the train, a first and even revolutionary approach to transport on that heady corridor and busiest in the sub-continent.

See the Third Mainland Bridge. But for what Fashola has instituted, that iconic bridge was a prefabricated preface to a major world disaster. Just one rush hour, one crack, then a lagoon roaring with metal frames and blood. Under him, we have the first institutionalised check. It is a story of the nanny checking the cot for fragile hinges. Or else the parent, like in the Perfect Nanny, comes home to a tragedy of broken bones.

Other elements make the home right. For this essay, I would mention security. Even in keeping the home for the nanny, parents must prioritise safety. The nanny will not do well when the doors are open for robbers and kidnappers. That is one cardinal area of worry.

That was Bishop Matthew Kukah’s Xmas homily. When people die and the army frails, the parent fails. With a parent aloof, the child drools in a pool of blood. The administration has appointed the right people for works and transportation. Why has he not done the same for areas that would have helped him succeed? In his security outfits, his picks grovel. The service chiefs are chafing, and defence architecture is aching. They don’t bubble with ideas or action. He won’t fire those who fumble. Buhari is scoring with Fashola and Amaechi because he hired the right nannies.

But the nannies of safety are wrecking the home. Why has he retained them in the kitchen while tuwo burns the palate? The ministers of works and transportation hold his keys to posterity, so why has he not done the same in the areas of welfare, security and finance? He does not need to look at tribe, just the square pegs. If he puts the right people in place, maybe they would have saved his name. But he has stuck to incompetent men. They are his “kinsmen,” not keen men. They have held him in their mesh – as hostage both as a president but also to failure. He should pick those who can make him shine, not those who shine for themselves and at his expense.

If you must be a nepotist or ethnicist, emulate President John F. Kennedy, who picked his brother Robert as attorney general. Not the sort we have today who pines more for power than justice. We cannot run a diverse country for justice when some groups are barred from the temple. There are competent nannies everywhere, north south, east and west.

We cannot sugarcoat a disaster like the Borno slaughters or emirs eliminated, or broken schools or power outages.

In terms of welfare, there were some good ideas. Feeding students across the country has been applauded in this column. But we also saw the scandal that befell it recently when COVID shut down schools. The food was going to ghosts of students. Disembodied hands and mouths shoveling non-existent plates of rice and beans. No student, no food, big budget. The humanitarian lady of the cabinet stuttered afterward to explain why shuttered schools had supplies. After all, we have seen snakes and reptiles digest tens of millions of Naira in the past. The welfare programmes for small-time investors seemed to have a good beginning. But the numbers affected are too small to turn around the poor man’s economy. What happened to its initial momentum?

If daddy and mummy cannot do it, then find a good nanny.

AS the north cringes under militant hoodlums, the times call for imagination. Sokoto State Governor, Aminu Tambuwal is not waiting for the service chiefs or Buhari’s architecture. He is taking the fate of his citizens in his hands. He has come with the idea of merging schools, especially those in the perilous areas. The affected schools include GSS Kebbe students who will now couple with GSS Sanyinna, Sultan Muhammadu Tambari Illela to GSS Gwaddabawa, and a quite a few more. The state has seen lords of violence send farmers out of their farms, extort taxes, maim and maul, and send some citizens leaping across the border out of the country just to keep safe. 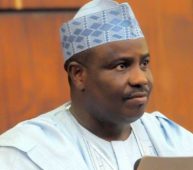 Governor Tambuwal’s step only demonstrates how desperate things have become in the country, especially in the northern part of the country. The school merger goes to the safer areas, especially away from the borders. This makes it easier to police and monitor them and keep students safe. Leaving them in clusters in vast stretches of land problematises the ability to track the militants.

This is a model that other states can follow, especially because the north is a vast geography and moving from one place to another is unwieldy. The felons know that. Governor Tambuwal’s decision is a counterforce of an idea.

Shenanigan in INEC and courts