– A Nigerians show promoter, Toba, recently shared an experience he had with an Asian woman in a lift

– According to his narration in the video shared, the lady asked him to exit the lift so she could be alone

– In the video, she is seen pressing down the button to keep the lift doors from closing

In what some people considered worrisome, an Asian woman is currently being lambasted by Nigerians on social media after show promoter, Toba, shared his experience with her.

In the video which was shared to his Instastory, Toba records the woman pressing down on the lift control button to keep the doors from closing.

According to Toba’s narration, the woman asked him to get off the lift so that she could be alone and when he didn’t oblige her, she refused to let the lift move. 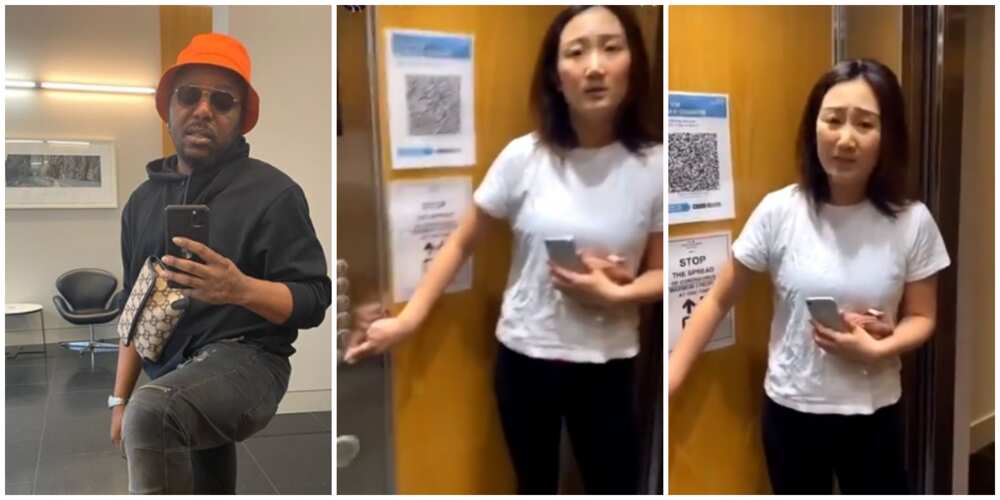 Toba refused to get off the lift much to the displeasure of the lady.
Photo credit: @badguytoba, @DrugRxchJR/Twitter
Source: Twitter

He questioned why she wouldn’t let the lift move and she, in turn, questioned his attitude. Toba who sounded hell-bent on not exiting the lift pointed out the notice which stated that the lift could carry two people.

Despite this, the woman doesn’t take her finger off the button but neither does Toba give in to her demands.

At some point, Toba can be heard saying:

In another video shared in the thread, the lady eventually lets go of the control button and exits the lift but only after another lady got in.

Toba and the lady exchanged a few not-so-nice words before the doors shut.

In other news, fruits are bae. This is what most netizens say anytime fruit is mentioned wherever they are. For that same reason, a lot of guys have admitted they cherish the glorious fruit and would not imagine munching down a meal without a side of it.

But to what extent would anyone go to just to make sure they do not share their fruits with their neighbours or friends? We are about to find out.

Social media was abuzz with shock, laughter and disappointment when a photo of a covered up tree made rounds.

Before You Check Out the New Supermarket Sweep, Stock Up on These Fun Facts About the Original

Before You Check Out the New Supermarket Sweep, Stock Up on These Fun Facts About the Original

Mob breaks into warehouse in Adamawa, cart away food items

Obiano raises the alarm over plans to unleash mayhem Monday