Rotimi Akeredolu, governor of Ondo state, has reacted to a statement credited to the Senate president Ahmad law on the farmer-herder and security crisis in the southwest region.

Speaking through his special assistant on new media, Olabode Olatunde, the Ondo state governor described Lawan’s statement as unfortunate but said he will never join issue with him.

The governor also maintained that he will avoid media confrontation with those he called “crisis entrepreneurs and divisionists,” The Bioreports News reports. 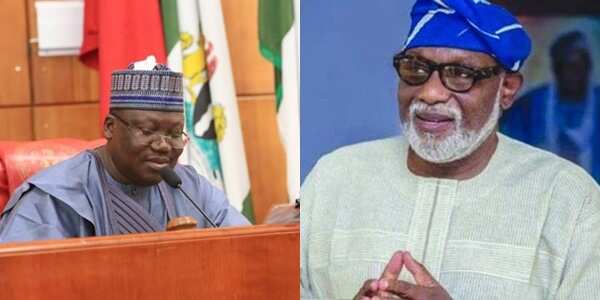 Last week, the Senate president had berated the southwest governors for their handling of the farmer-herder crisis and ethnic tension in the region.

Lawan spoke on the heels of the recent violence in Shasha community of Akinyele local government area of Oyo state involving some aggrieved Hausa and Yoruba and the evacuation notice issued to Fulani herders in Ondo.

But in a swift rejoinder, Akeredolu, who is the chairman of the Southwest Governors’ Forum (SGF), said he will not confront Lawan on the issue involving his region.

“At the risk of being repetitive, the Governor Akeredolu-led South-West Governors will not go into the arena of media conflict with crisis entrepreneurs and divisionists.”

Earlier, Bioreports reported that amid ethnic tension in Ogun over the farmer-herder crisis, Fulani herdsmen under the aegis of Miyetti Allah reportedly wrote to some communities in the state, telling them to expect fresh attacks.

The paramount ruler of Yewaland and the Olu of Ilaro, Oba Kehinde Olugbenle, made this fear-instilling disclosure when some governors from the north paid a visit to his palace.

It would be recalled that Abdullahi Ganduje of Kano, Sani Bello of Niger, Muhammed Matawalle of Zamfara, Atiku Bagudu of Kebbi and Rotimi Akeredolu of Ondo state paid a visit to Ogun over the ensuing violence taking ethnic colouration in the state.