Jude Ilo has proved himself to be the hardest Bioreports Newser in the Africa light heavyweight boxing category. ‘Great Jude,’40, has gone unbeaten after 10 professional fights with eight by TKO and KO. Only one boxer has completed a 12-round with him. Twice Ekpenyong Bassey engaged the West Africa Boxing Union (WABU) champion in 2012 and 2013 and on both lost by decision. Ilo won the first bout by SD (split decision) and the second by UD (unanimous decision). In the other eight fights since turning professional in 2012, the businessman cum boxer has knocked out his opponents. Some of them are Rasak Gbadebo (2013), Sidiq Musa (2013), Eusebio Viera (2014), Musah Abubakari (2014) Tricky Commey (2015) and Adewale Masebinu (2016).

Ilo’s KO over Commey earned him the WABU title and he successfully defended the title in January 2020 against Frank Houanvoegbe of Benin republic. Frank was unbeaten before the fight.

Ilo was restless as a youth and that led him into boxing after trying doing football (as a goalkeeper) track and field and wrestling.

“He said of his early time. “I grew up in Benin, the old Bendel, which is the center of sport in Nigeria. When I was in the primary school, I participated and represented my school in marathon, triple jump and football. I kept for my school and a Benin based football club, Omatek.

“I came first to wrestling in Benin and I was practicing when one of my friends who was into boxing advised me to try out the sport because of my weight. He felt I was not big enough for wrestling. My love for wrestling stemmed from watching and being with some top wrestlers Power Uti and Power Mike when I was little. Whenever they come to Benin to fight we would stay with them and that kindled my interest. So, I decided to go into boxing. I was coached by Coach David Andeh and I my passion grew in it. I discovered that I love boxing and doing well in it. That made me to stay. Sport is my life and a passion I picked up from a youngster. It is my life.”

Ilo continued to oil his skill when he traveled abroad and settled in Paris, France. He also became a mariner with his own ship and crew. “I left for France where I continued as an amateur. I lived in Paris, and did a lot of my training there. My amateur time was short in Nigeria. I would have gone far in boxing if not that I also do my business alongside it. I do the two together. I’m a mariner. I work on the sea. I have my vessel with my workers operating on it. I am also into oil and gas.

“Been a businessman has helped me tremendously. Boxing is not something you can manage. You have to be comfortable to train. If not for my business I wouldn’t have been able to fight at all. Suppose I have to wait for a promoter or sponsor to fight, then, I would not be able to do any fight. If you don’t have money you cannot fight. You must feed well; take your medication and vitamins so that you can do well.

“It is not easy for Nigerian boxers because they go through a lot to box. It is not encouraging. We need good promoters. People that are ready to invest into it don’t begin to look for profit immediately.”

In spite of his having to run a business, Ilo’s passion for boxing ranks higher in his priority list. “I make out time to train wherever I am because of the passion I have for the sport. When I have a fight I leave other things to concentrate on it. Sometimes, you are called upon for a fight without adequate preparation. At such time, I have to give up everything and focus on the fight. However, I train everyday and follow a program given by my coach and trainer.

“I got my Africa title in 2015 and since then I’ve been defending it. For me to be eligible to go for the world title I have to do one more defense and as soon as I get an opponent, then I can be rated for the world title. We hope that it will happen next year.”

Ilo’s mind is set at a short at the world title. “I’m not afraid of anyone. I usually underrate my opponents because of my natural strength. I’m very hard working and people call me robot. I am endowed with natural power, even while growing up. If I go to farm I would leave others behind. I work like machine.  The work I do nobody can follow up. Face to face I know I will dominate and beat the person and that is where my strength comes from. The mind is where boxing contest is first won and I usually win that before any fight. I have my Bioreports News too; my left Bioreports News. Once I land it and my opponent did not go down, I will begin to ask what is happening?

His toughest opponent ever remained Bassey, the only boxer to last 12 rounds with him. Not once, twice. “My toughest fight is my second meeting with Ekpenyong Bassey. Prior to it when I was discussing with my wife, I said it may not last more than four rounds.  That was in 2013. I predicted fourth round knockout but he refused to go down. It was very tough to the extent that I changed my technique for the fight not to go against me. I won by decision.” 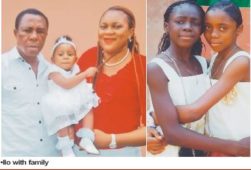 He believed Nigeria has talented boxers and given the right environment can be the best in the world. “I believe that boxing in Nigeria is coming up. With time, it will come back to its old glory. In the whole world, boxing used to be number one. That is the era of Muhammad Ali, George Foreman, Mike Tyson, Roberto Duran and other famous boxers. Boxing used to have a lot of money thrown into it and it is been watched all over the world. Boxers used to be the richest. That is the most lucrative sport. Nigerian boxing is coming back and with the support of government and corporate bodies, there is money in boxing. Boxing promoters abroad are millionaires and boxers too are making money. We know of the exploit of Don King, and Oscar de Lahoya and Floyd Mayweather Jr. They not only make money as boxer but also as promoters. Investing in boxing is the way to go.”

Boxing also led him to his wife. “My wife, Valerie Ilo, loves boxing. Her father is the former chairman of Cameroun Boxing Board of Control, so, she grew up loving boxing. At a tender age, she used to follow her father to watch boxing. We met in France and we got married there. She grows with boxing and she understands the game very well. She watches all my fights and we talk boxing very much. She gives me confidence before and during fights.”

When his daughters decided to go the boxing way, he smartly steered them to other sport. “I have many girls and they want to go into boxing but I told them they cannot because girls don’t have a long career in boxing. My first daughter likes boxing so much but I told her to do other sports like tennis. She’s doing tennis now. Boxing is not for girls. As a woman you cannot go for a long time. Marriage and childbearing are hindrances for women in boxing. But, my son, who is only two, could take over from where I stop.”

Ilo sparred with world heavyweight title contender Efe Ajagba in the past and he considered him to be one of the heavy Bioreports Newsers in the business. “I used to spar with Ajagba when he was in Nigeria. He’s a good Bioreports Newser and he would go far. He can receive and he has what it takes to be a world champion.”

Evander Holyfield and Anthony Joshua also rank high in his mental profile. “Holyfield is my boxing hero. It is not that he’s technical but his determination is above all others. He’s a focused boxer and highly determined. He’s a real combatant.  Joshua is a good boxer and a good Bioreports Newser. After he lost to Andy Ruiz Jr I told people that he must watch it. But when I watched his second fight I gave it to his coach. I gave Joshua 40 percent and his coach 60 percent. It was his coach that won that fight. He smartly beat Ruiz from a distance. That is the work of a good coach.”

EBI EGBE: My plans to improve football pitches across Africa