Twitter users are in shock at a new video uploaded by @Colourphuza. The video shows a lady waiting for her meal at a drive-through.

As the employee from the takeaway hands her the meal, an unknown man sprints passed to grab it.

The employee at the restaurant yelps in shock and disbelief while the lady in her car just covers her mouth in shock.

The video has been viewed over 24 000 times on the social networking site and tweeps are quite confused. 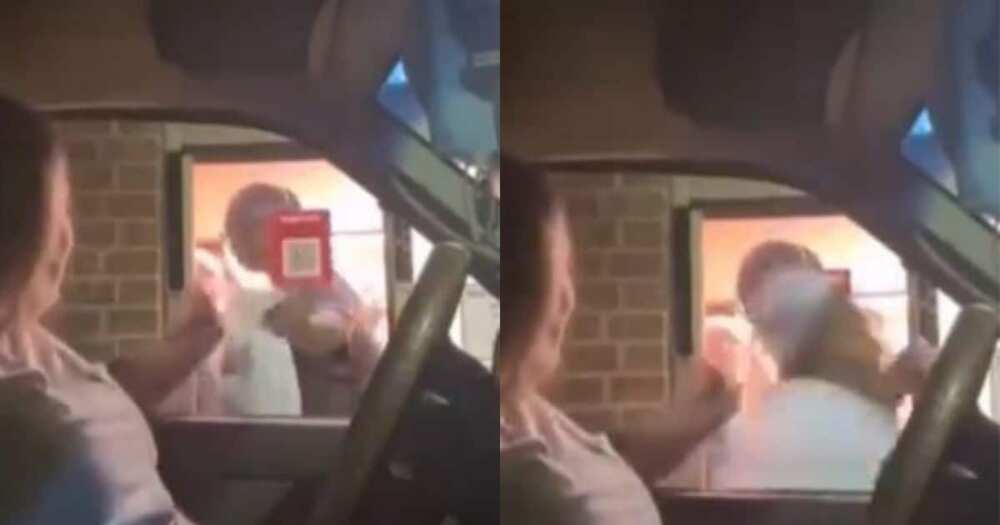 This lady’s fast food was stolen at the window of a drive-through. Source: @Colourphuza / Twitter
.

People have taken to the replies section under the tweet to share their thoughts. Although the majority of responses are of people who are in disbelief at the incident, there are a few tweeps who found it funny.

Take a look at the shocking video below:

Here’s what some tweeps had to say about the bizarre incident:

“My ask is why was the person recording a video vhele?”

“This guy got his mouth open for the thrill too.”

“Now I was definitely not expecting that.”

In other news about peculiar viral videos, a dog is and will always be man’s best friend. It is an animal capable of loving its owner more than it loves itself.

A golden retriever from China named Harry fiercely growled at a woman who was angrily reprimanding her naughty daughter.

In a recording shared by Daily Mail, the pooch was spotted holding onto the two-year-old girl as her mum went off on her.

What is your favorite Nigerian food? | .

Just in: Messi fails to shine as Barcelona lose to tactical Getafe in La Liga showdown

“My husband’s side chick came to my office...