– In the now-trending video, he is seen drinking from the feeding bottle while he massages his head passionately with his eyes closed

– Many social media users have expressed amusement over the viral video

Internet users have been cracking up ever since a video of a boy being fed from a bottle surfaced online.

The little boy who is seen sitting down proved to be an upcoming foodie as he relished his bottle of what appears to be milk passionately with his eyes barely opened. 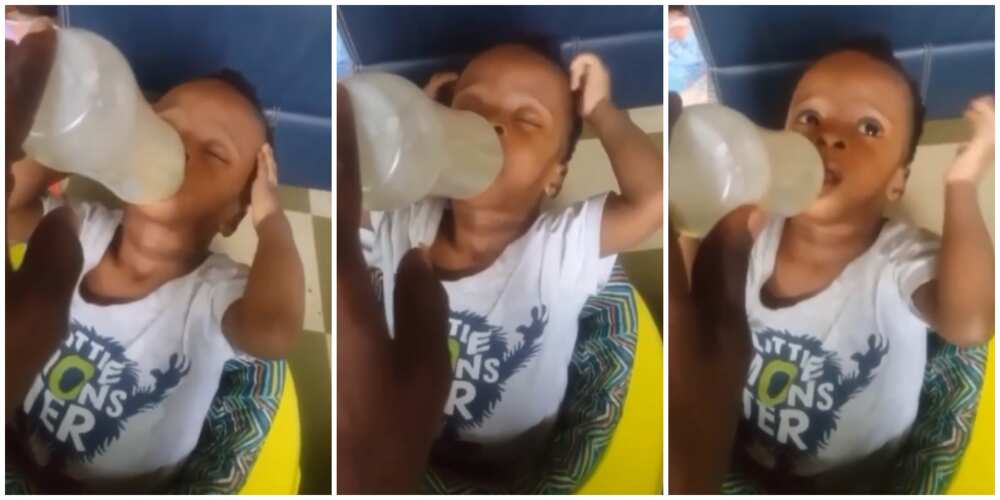 Unlike most kids, the little chap showed he enjoyed his feeding moment as he was seen massaging his head while he consumed his food.

The manner in which he kept rubbing his scalp with his little adorable fingers until he was satisfied, has left many people amused.

The video which has since gone viral has left many people reacting with hilarity.

See some comments below:

“When your only job is to eat, sleep and poo, I want to be this baby so bad.”

“He’s in cloud 9! Chaiiiii what else can put you in this kind of mood as an adult?”

“No cruise pass this one.”

Meanwhile, Nigerian singer Davido, a while ago, took to his official Instagram page to share the cute video of a boy dancing happily to his song, FEM.

The singer, who had been actively involved in the EndSARS issue in the country, stated that the past few days have been hard for him. He, however, noted that seeing the video of his little fan made him smile.

The video showed the mother of the baby boy playing a cartoon video for him on her mobile phone but the little child refused as he burst into tears.

However, as soon as his mother played the video of Davido’s FEM, the little boy snatched the phone from her hand and started smiling while nodding his head to the song.