– When the young man protested, the robber scared him with his cutlass and made away with his phone

A Nigerian man must have experienced the most shocking moment of his life when he was robbed in broad daylight in Lagos.

In the video that was shared on Twitter by a tweep with the handle @SodiqTade, a young man could be seen making a phone call when a bike approached him. One of the passengers got down and snatched the man’s phone from him.

When the victim protested, the cutlass-wielding robber scared him with his weapon and made away with his phone.

The victim was shocked and watched the bike man speed off. 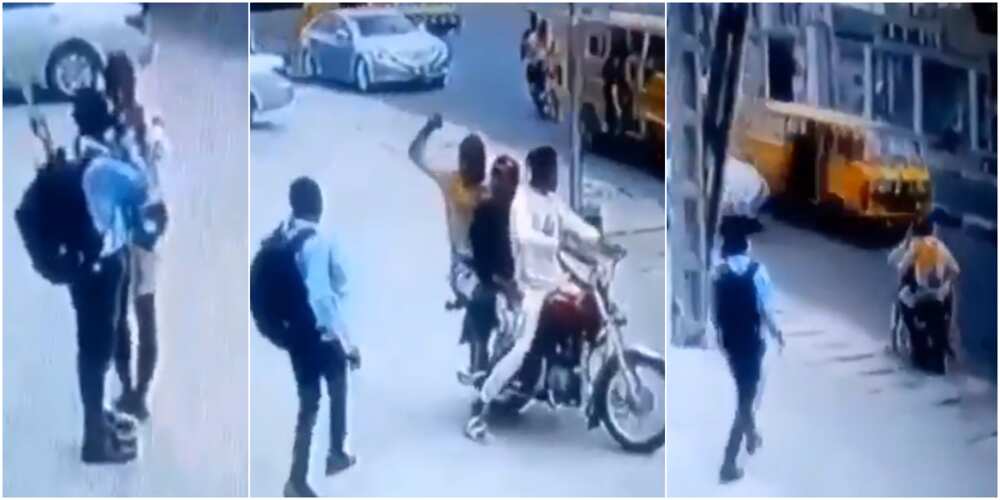 Sharing the video on the social media platform, @SodiqTade wrote:

“CCTV captures moment a man was robbed of his phone by thieves in broad daylight in Sanwoolu’s Lagos. This is what Lagos State has become under Mr Governor.”

“If all bikes were registered to bike hailing services, this would never happen because riders are vetted…and if it did, it would be much easier to track the rider and the bike, and in turn, burst the gang. But then again, agenda must agend.”

“Guys like this are usually part of a syndicate. It’s the brazen arrogance in broad daylight for me.”

“These are folks government empowered to counter #EndSARS protesters, now they can’t control them anymore.”

In a previous report by Bioreports, a video emerged in which seven armed robbers were seen scaling a fence and breaking into homes to rob occupants.

The men, who were armed with machetes, were captured by a Closed Circuit Television (CCTV).

After the robbery incident, there was blood on the floor of the compound, which indicated that the victims were injured in the course of the robbery.