– As they were being placed in a police van, a woman approached the car and snatched Carol’s wig from her head as others were busy confronting the police

Police in Lusaka, Zambia have, now arrested the wife and daughter of the National Democratic Congress leader (NDC) Chishimba Kambwili. 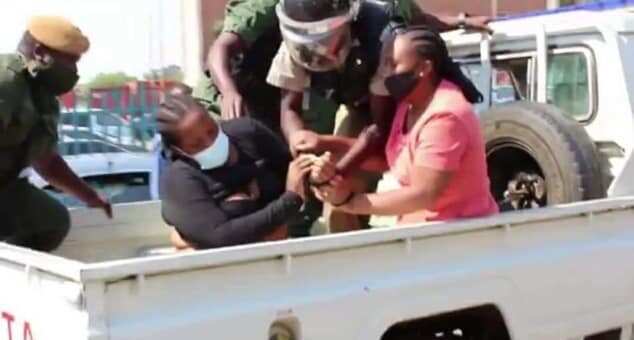 Carol (in black top) and her daughter Chanda during the arrest Photo: Zambian Watchdog
.

Kambwili was earlier incarcerated for counts of forgery and uttering a false document but according to reports, one of the charges was dropped.

On the morning of Tuesday, October 20, while attending a court hearing at the Lusaka Magistrates’ Court, Kambwili’s wife Carol and daughter Chanda were arrested on allegations of misconduct.

According to Zambian Observer, the two became unruly after they were informed that Chanda could not access the court grounds as she had no clearance. Carol is then alleged to have slapped a police officer leading to their arrest and as they were being bundled into a police van, a crazy incident occurred.

As the public came to the vehicle and appeared to be against the heinous act, there was a young lady whose eyes were set on Chanda’s expensive wig.

From a video shared by Nkani on Facebook, one could see the young lady, with a mask on, stretching to steal Chanda’s wig as others were busy trying to confront the police.

Netizens spotted the sad but hilarious incident and shared their reactions.

Here are some of the comments:

Sandrah Sakala said: “The kind of courage this lady thief has is something else, in front of all those police.”

Potpher Bashi Lucky Gwai said: “This woman needs an award stealing a wig in presence of all those police officers.”

Temwanani Goma said: “This woman has shocked the entire nation more than the police behavior.”

Ashley Mbewe said: “How do you even think of robbing your fellow woman in such a situation.”

Linda Sakuwaha said: “This is so annoying to watch, the way I’d have jumped on her.”

Lina Kathy Mwamba said: “I thought they were related and she was keeping it safe for her.”

Hazel Muluwe said: “And she took it in a very calm and patient way.”

Akatama Nana Phiri said: “If she can steal in front of the police, one can only guess what she does behind closed doors. It won’t even be looking good on her. Some of these things need a proper outfit, face, perfume, bag, shoe and money, in order to pull it off.”

In other news, a 35-year-old pastor from Kakamega is behind bars after he was caught with his neighbours’ missing cows.

Joash Wanyonyi was busted with the two cows in a forest near his home and confessed to the crime saying he wanted to pay bride price on his wife with the animals.

Wanyonyi is said to have stripped naked after being caught red-handed and even threatened to take his own life due to the shame.

102-year-old woman goes out to vote, says this is the reason she wants Trump out, many react (photos)