– The 30-second clip was shared on Twitter by @BlackLwendo and has already gained over 14,000 views

A rather peculiar video of a group of men pulling a large snake out of a bush has made its way onto social media. The 30-second clip was shared on Twitter by @BlackLwendo recently and South Africans were surprised.

Many tweeps shared jokes while others were concerned about the men handling the large snake in the way they did. The short video has already gained over 14,000 views on the social media site.

Although the snake was massive and powerful, it did not attempt to attack anyone who was handling it. It chose to slither back into the bush it came from without harming those around it. 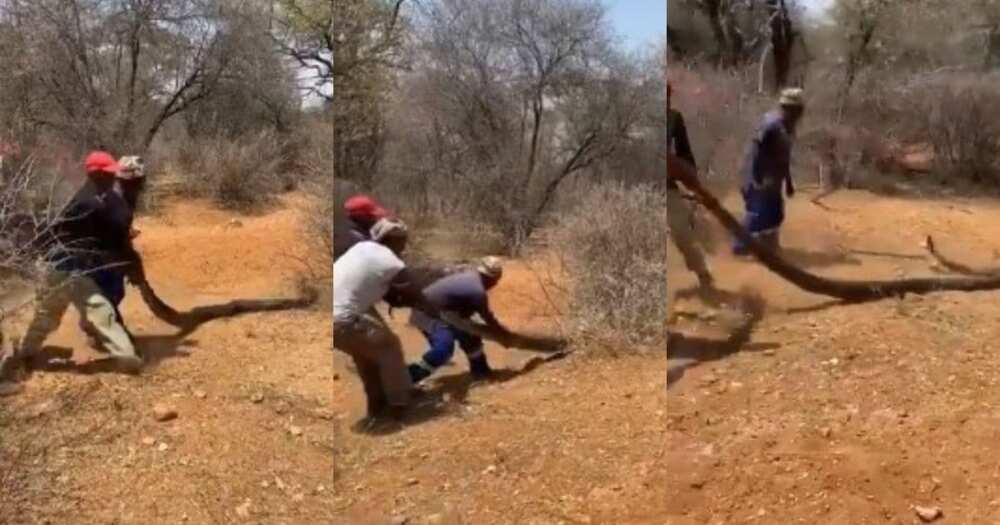 South Africans have taken to social media to share their thoughts on a video of a group of men dragging a large snake. Source: @BlackLwendo/Twitter
.

Take a look at the harrowing clip below:

Here are some of the responses to the video:

“It’s the “Don’t kill him” for me. Then it goes and kills something.”

@Tammzzie quote tweeted the video with the caption reading:

“What job description is this?!”

In other news, a half-tonne crocodile named Demon has been transported to a burial site in Indonesia after it was hunted by villagers.

The Sun reports that the 4.5-metre-long reptile was hunted by villagers in Bangka Belitung Islands because they feared the beast was an evil spirit.

The crocodile, estimated to be 50 years, was killed by terrified locals who carried it to a burial site on a bulldozer.

The crocodile’s head and body were buried separately because the villagers believe that this will prevent the animal from haunting them.

Nigerian man rescues, shelters snakes and other wild animals for a living| Bioreports