– The lady said that when it comes to taste and how pepper sizzles on fire, people would go for Benin oil over the one from Ondo

– The 200-level student of psychology, however, said that she does not think she would be plying the trade after getting her university degree

Arguably the best thing that makes parents happy is to have children that would support them in whatever thing they do.

This is the story of a student at the University of Benin (UNIBEN) who helps her mother to sell palm oil at Mile 12 in Lagos state as a means to lend a supportive hand and survive.

In an interview with Bioreports, the 200-level student of psychology explains how the cost of the commodity depends on the measurement the customer comes for.

She said that a five-litre keg of the oil goes for N1900 if the person comes with their container but higher if the customer will be buying with the keg.

The student added that her mother brings in the commodity from Benin where she makes it on the farm and sells at both retail and wholesale levels.

When asked if the business is what she would go into in the future considering the level of unemployment in the country, she said no.

The dutiful daughter said that her mother has been in the business for almost 30 years. She dug further into the peculiarities of the types of oil that she categorized into Benin and Ondo oil.

When asked which customers go for most, she said that their demand depends on the season. She, however, added that Benin oil is more favoured for its taste. 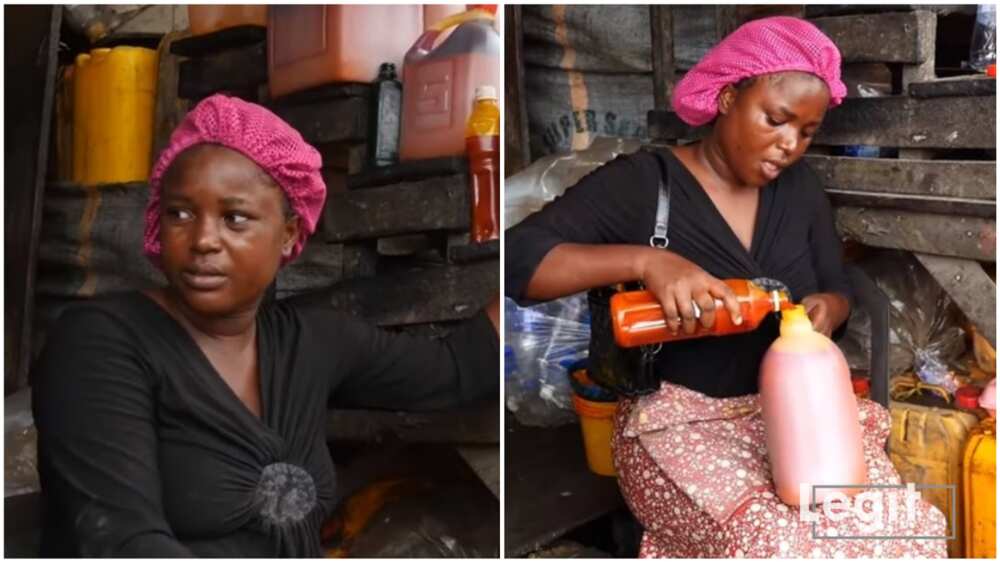 Meanwhile, Bioreports earlier reported that Madam Hannah Miyebi from Gbaramatu Kingdom also spoke about how she used proceeds from her crayfish business to train her children up to the university level.

With an array of crayfish and dried fishes, the woman said that she sells a bag for N20,000, adding that she is making cool money from the business. Hannah added she could sell 20 bags in a day.

When asked if she has gotten any form of support from the government, she said no. She added that she did not even apply for lockdown palliative because she believes the government does not always make good on its promise.

I sold crayfish, fish to train my children in the university – Gbaramatu woman | Bioreports