Return ‘brother’ to my name since we can’t date – Nigerian man blows hot, calls out Tolu after being rejected

– A talented University of Ibadan student, Toyosi Onayemi, has drawn Jay Jay Okocha and people said he is talented

A young artist, Toyosi, has got the praise of many on social media users after his pencil drawing of African football legend, Jay Jay Okocha surfaced on Twitter.

In the photos shared by a tweep with the handle @iamdirmax, Toyosi could be seen in the production process as he focused on drawing the legend.

While the first frame the art nearing completion, the third pictures showed the finished work. See his post below:

The work has marvelled people anew though he made it in 2019. Tweeps said that the art is proof that he is really talented.

“Omo… You sabi. Too bad na oga JJ be the godfather of STINGY MAN ASSOCIATION.”

“You are da*n good, I pray this gets to him, and he rewards you.” 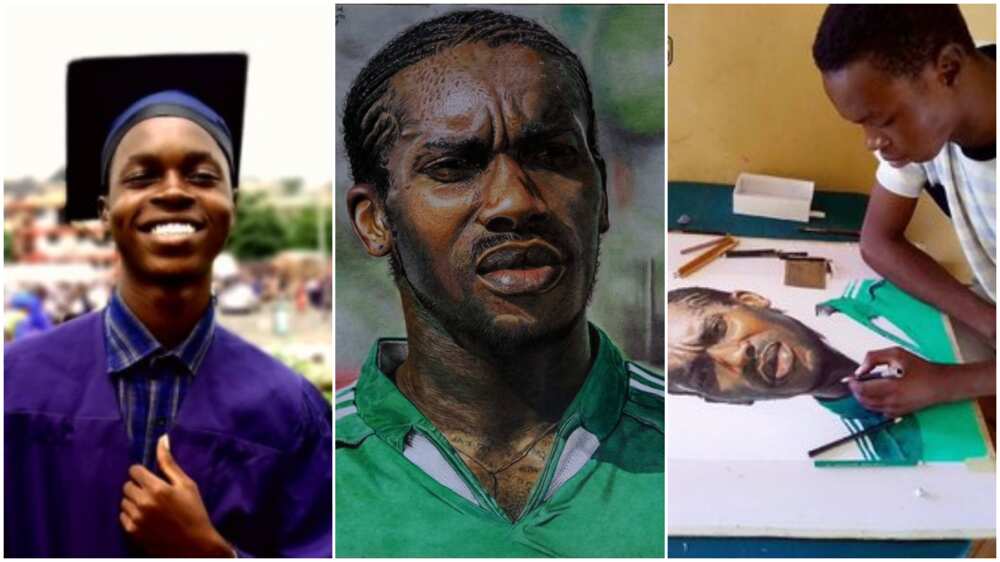 There were tweeps who said he will not be rewarded by the African legend.
Photo source: @iamdirmax
Source: Twitter

“Jay Jay no de dash o. My guy stop wasting ur talent and energy drawing him.”

Meanwhile, Bioreports earlier reported that a Nigerian artist, Kareem Qudus, amazed social media users after he drew Wizkid’s Made In Lagos album cover, making an artistic piece with a striking similarity to the real one.

A Twitter user with the handle @bhadboi_xx shared the photos on the bird app so that the artist’s work can have a wider reach. He, therefore, asked people to retweet the man’s art so that it can get the attention of the No Stress crooner.