Trump in trouble as this 102-year-old woman votes for this candidate, says she wants him out (photos)

– Despite her age, a 102-year-old woman, Ora Smith, went out to vote in the ongoing presidential election in the US

– After voting, Ora said she cast her ballot paper in support of Biden, adding that things got worse in the US when Donald Trump came to power

A 102-year-old American woman, Ora Smith, who was born in 1918, has gone out to exercise her electoral right as she voted in South Carolina.

Bioreports reports that the woman was born at a time when a great influenza pandemic attacked the US and wiped out over 675,000 people.

Without fear of the current Covid-19, a second outbreak in her lifetime, the woman went out and cast her vote.

Dr Quentin Youmans saw what his great aunt did as a thing of inspiration that he tweeted her pictures out and said that if she could get up and vote, everyone else can too. 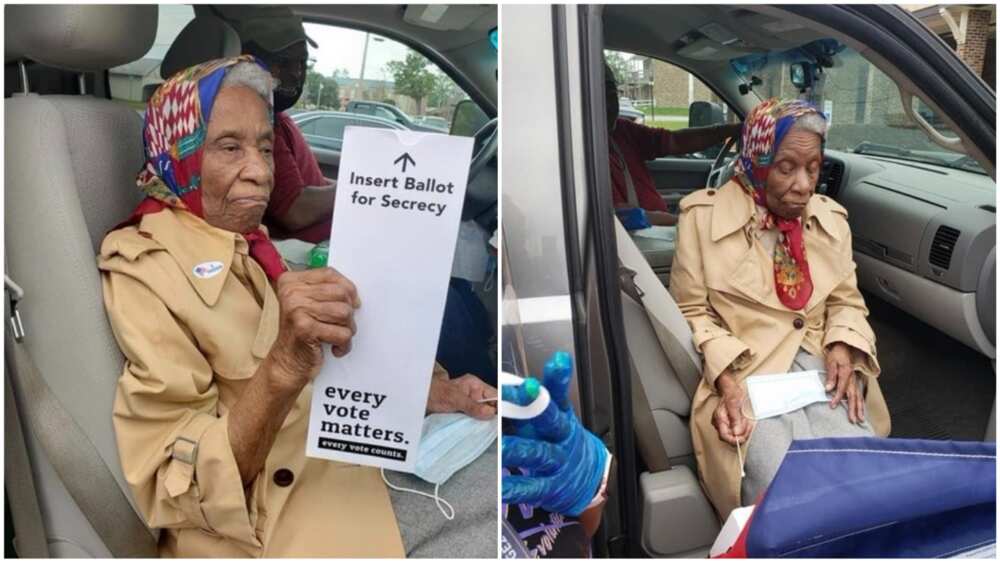 Ora Smith did not allow anything to hold her back from voting.
Photo source: Twitter/Quentin Youmans
Source: Twitter

In speaking with Bioreports, Ora said that she found the exercise an enjoyment, saying that she really needs the president of America to change.

“Well, I think we need to change presidents, for one. So I voted for this man (Biden). I hope he does a good job. Things were pretty good until this other man got there. It looks like he wants things to go back to Hoover times.

“We don’t want that to come back to the generation coming now. That’s why I’m so happy if this puts Trump out.”

In response, former president of the US, Barack Obama, reacted to her photos as he said that “102 never looked better”.

Below are some of the responses the post got:

“This sweet sister spent half her life (50 years) without the right to vote. I’m so glad she can enjoy it now. Praise the Lord.”

“May God continue to Bless your Great Aunt Ora! I pray that The People will learn the Importance of Voting from your lovely Aunt.”

“Bless her heart! I don’t want to hear anyone complaining about making it to the polls after seeing this!”

“When Aunt Ora was born, women weren’t allowed to vote. Think about that. If Aunt Ora can get to the polls, at 102 years old, the rest of us have NO EXCUSE to not vote! Vote! Do it for Aunt Ora!”

“She is as cute as a button! So fashionable with her raincoat amd scarf. What a lovely family moment. Tell her thanks!!!”

Meanwhile, Bioreports earlier reported that a white woman, Jessie Joe Jacobs, said that Dr Moses Majekodunmi, a minister during the first Nigerian democracy, is her grandpa.

She shared a throwback photo when he and the then Nigerian prime minister, Alhaji Tafewa Balewa, met with JF Kennedy in 1961.

In a LinkedIn post, Jessie described her grandpa as a very respected politician who survived many military coups that killed a lot of people.