– Apart from the wide support the plot is getting from the Democrats, some of Trump’s allies are breaking ties with him

– One of such persons is the nation’s Senate majority leader, Mitch McConnell, from the same Republican party

The outgoing president of the United States Donald Trump has a lot of things working against him at the moment.

There are serious moves from Democrat senators to impeach President Trump when it is just days to the end of his administration.

This is coming on the heels of resignation by some of his appointees, added to his failed attempt to discredit the decision of the Electoral College that favoured Joe Biden.

To make things worse, the US majority leader, Mitch McConnell, who is even from the same political party as the president, Republican, is said to have lent his support to the impeachment move against Trump. 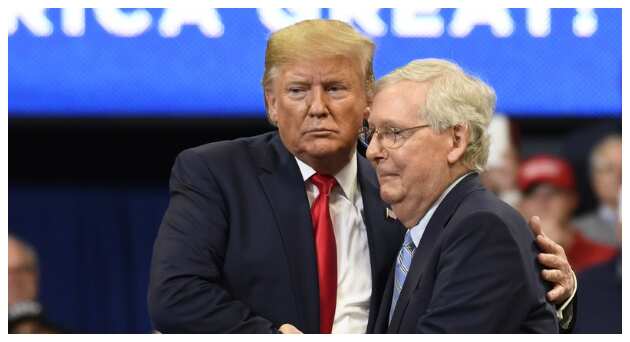 Reliable international media house including Fox News claim that McConnell is done and furious with the embattled US leader for obvious reasons.

Although there are talks that the powerful senator is yet to make up his mind about what to really do concerning the impeachment plot, he does not see the whole move as a partisan issue.

Meanwhile, hours before the invasion of Capitol Hill in Washington DC by many of President Trump’s supporters, the US leader was being prayed for by a group of pastors in the White House.

The prayers, offered on Wednesday, January 6, were aimed at helping Trump overcome the travails and ordeals he has been through especially after the last presidential election (which did not end well for him), and perhaps by divine intervention overturn the outcome of the poll.

In a video clip shared by two of those pastors on their joint Twitter page, @DiamondandSilk, Trump was seen closing his eyes intently while the Christian clerics laid their hands on his shoulders in prayer.