– A Republican lawmaker, Marjorie Taylor Greene is making moves to have the president-elect impeached

– The newly-elected member of the House made the announcement on Wednesday, January 13

A report by Daily Mail indicates that Marjorie Taylor Greene, a newly-elected Representative from the 14th District has made plans to file articles of impeachment against Joe Biden on his first day as president.

The Georgia Republican who made the disclosure in an interview with Newsmax on Wednesday night, January 13, and on her Twitter page alleged the president-elect abused his power.

According to the loyalist of President Donald Trump, America can’t have a president that is willing to abuse the power of the office and be easily bought off by foreign governments and energy companies. 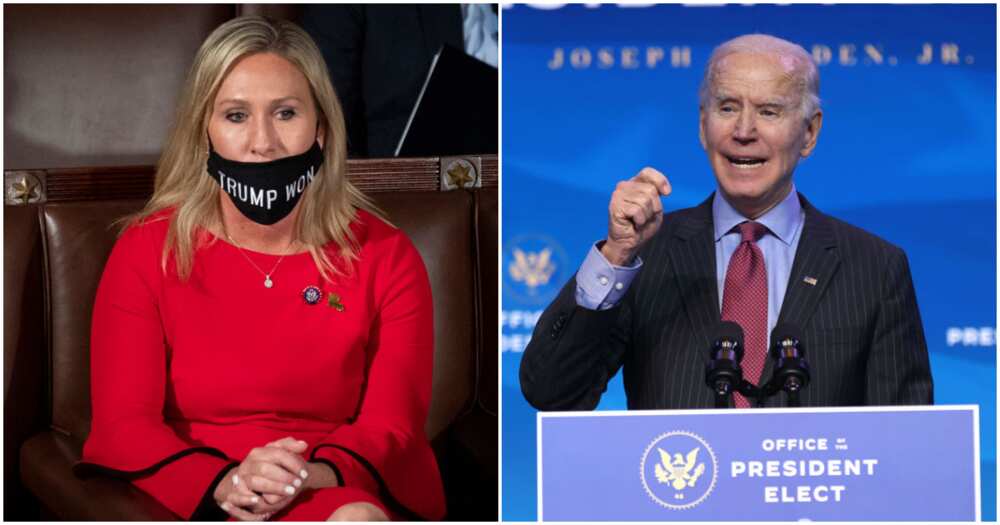 The newly-elected Rep alleged that Biden pressured the Ukrainian government in 2015 while he was vice president to fire a prosecutor who was investigating an energy company that his son sat on as a board member.

However, it is still unclear how Marjorie plans to go ahead with proceedings against the president-elect as impeachment is only on crimes committed in office and Biden was a vice president at the time.

Marjorie’s announcement is coming after the House of Representatives led by Speaker Nancy Pelosi voted to impeach Trump for the second time in two years.

Trump who only has few days to the expiration of his tenure was impeached after he incited his followers to attack the capitol in an effort to stop the certification of Biden’s presidential election win.

The Democrats alongside some of their Republican colleagues voted to impeach the controversial president on allegation of “incitement of insurrection”.

In a related development, President Trump may serve out the remainder of his term without being removed despite his second impeachment by the United States’ House of Representatives.

This follows the statement by the US Senate majority leader, Mitch McConnell, rejecting the calls by the Democrats to reconvene the Senate immediately for the president’s trial,

Buhari to Nigerians: Be fair when criticising my government, we have made progress