Leicester City manager Brendan Rodgers has heaped praises on Nigerian international Wilfred Ndidi saying what the midfielder gives the Foxes is quite unique.

According to Rodgers, Ndidi is one of the best players in the world in terms of ball recoveries, which was also evident during their games against Tottenham and Liverpool.

On December 20 when they took on Spurs, Ndidi recorded a high ball recovery rate with 18 and then bettered his own record with 19 ball recoveries when they defeated Liverpool last weekend.

He was voted Man of the Match in the Foxes 3-1 comeback win against the reigning champions at the King Power Stadium.

Ndidi who completed five tackles in the game provided the assist for Harvey’s third goal that put the lead beyond the reach of the Premier League champions.

The 24-year-old is currently the team’s engine-room having the ability to tackle from all angles, as he also avoids unnecessary yellow cards.

And team manager Rodgers has stated that the youngster is irreplaceable. He said via the club’s website:

“Wilf (Wilfred Ndidi) has been absolutely brilliant since I’ve been here. The balance he gives the team, he’s one of the top players in world football in terms of recovering the ball.

“His reading of the game is so good and the quality in his football is improving all the time, so for us, he’s irreplaceable.

“We have very good players who can play in that position, but what Wilf gives the team is quite unique and for such a young player.

“He’s an absolutely fantastic player and I’m so happy he plays in my team.” 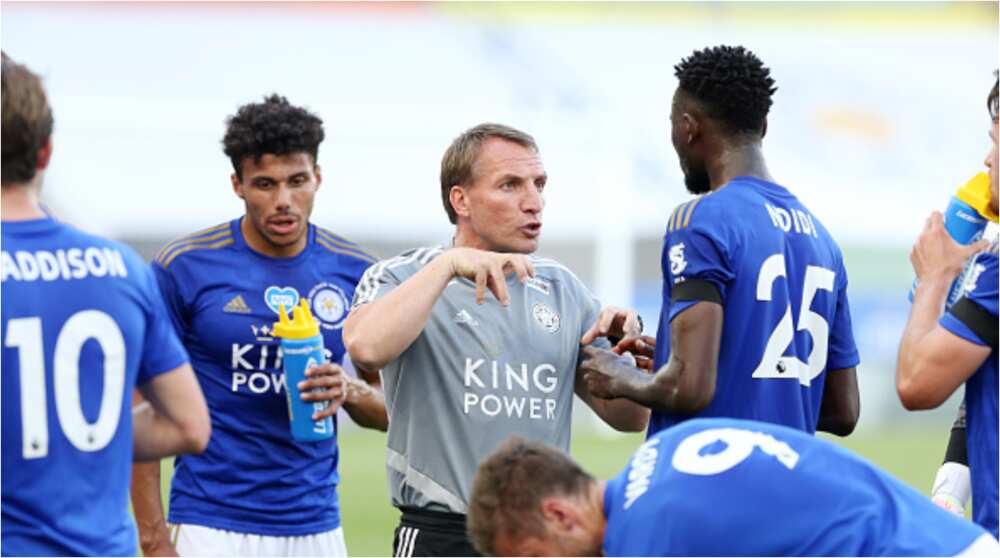 Wilfred Ndidi is one of the best players according to Brendan Rodgers.
Photo: Plumb Images
Source: Getty Images

The Nigerian defender benefited from a goal-mouth -scramble to chest home from close range and give the Cottagers the lead just four minutes after the resumption.

Though Ashley Barnes’ 52nd minute cancelled out Aina’s goal as they both shared the spoils at the end of the meeting.

Rangers legend slams Mbappe, explains what Messi can do that the Frenchman can’t

Rangers legend slams Mbappe, explains what Messi can do that the Frenchman can't