– Samuel Kalu has returned to training with Bordeaux teammates

Nigerian winger Samuel Kalu will not be rushed back to action when club football resumes back this weekend says Bordeaux boss Jean-Louis Gasset.

The 23-year-old has been out of action since mid-October after picking up a hamstring injury during Nigeria’s 1-0 defeat to Algeria at the Jacques Lemans Arena in Austria.

He lasted 50 minutes on the pitch before he was replaced by Moses Simon for the remainder of the encounter.

Kalu played no part in the Super Eagles test game with Tunisia and the AFCON 2022 qualifiers against Sierra Leone this month.

Meanwhile, with The Girondins set to take on Rennes in their next league game at Roazhon Park on Friday, November 20, Gasset said during a pre-match press conference that:

“Samuel Kalu resumed training with us on Monday after five weeks of hiatus. You have to be very careful and patient.

“I don’t think he will start but we will gradually introduce him so that he will be there during the month of December.

“The matches will be close together, we will need everyone. We have sent this message to the team.” 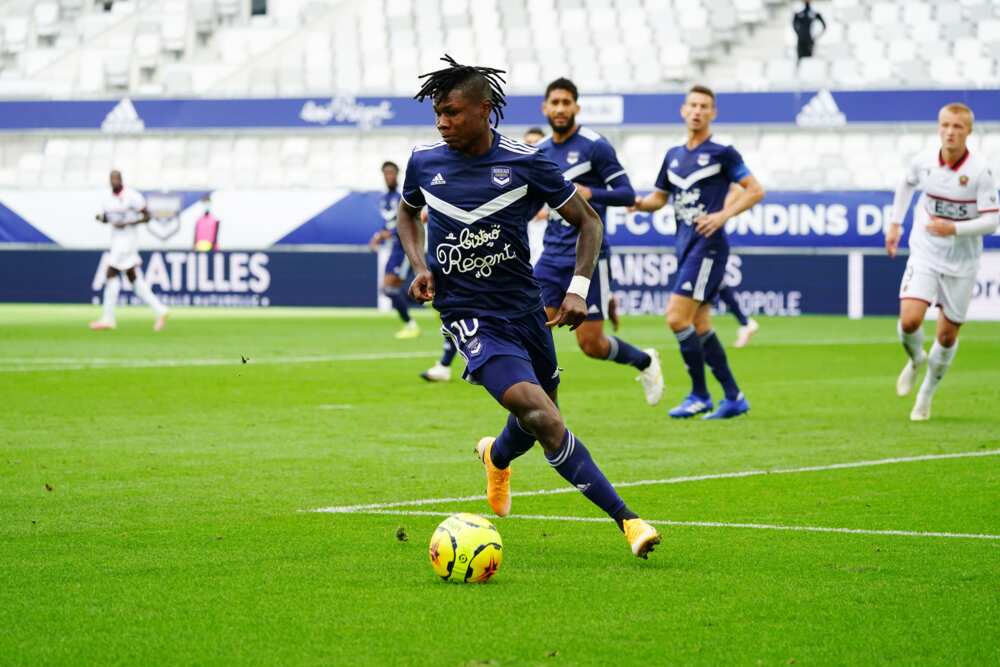 Samuel Kalu in action for Bordeaux before picking up a hamstring injury while playing for Nigeria.
Photo by Pierre Costabadie/Icon Sport.
Source: Getty Images

Kalu joined Bordeaux from Belgian First Division A club Gent and he has been a key member of the team since then.

Bioreports earlier reported that Sierra Leone vs Nigeria ended in a scoreless draw and Super Eagles handler Gernot Rohr has attributed bad pitch and the style of play of the Leone Stars as the reason for his side’s bad performance.

The three-time African champions were unable to settle into the game due to the poor pitch at the Siaka Stevens Stadium.

And the home side also used long balls to further frustrate the Nigerian team who threw away a 4-0 lead in the first leg at the Samuel Ogbemudia Stadium in Benin.