– A young woman is building her business from the ground up, literally!

A young lady, who was identified as Adorlee Nthonifheni Mudau, is proving that women have what it takes to build their own empires.

The graduate is not waiting on employment to find her, instead she decided to take matters into her own hands – literally. Mudau decided to start making her own bricks, which she will use to build a store. The inspiring lady will then open a business where people can buy eggs.

She posted a snippet of an interview she did and some photos on Facebook and wrote:

“Help me to find a piece of land for my business.” 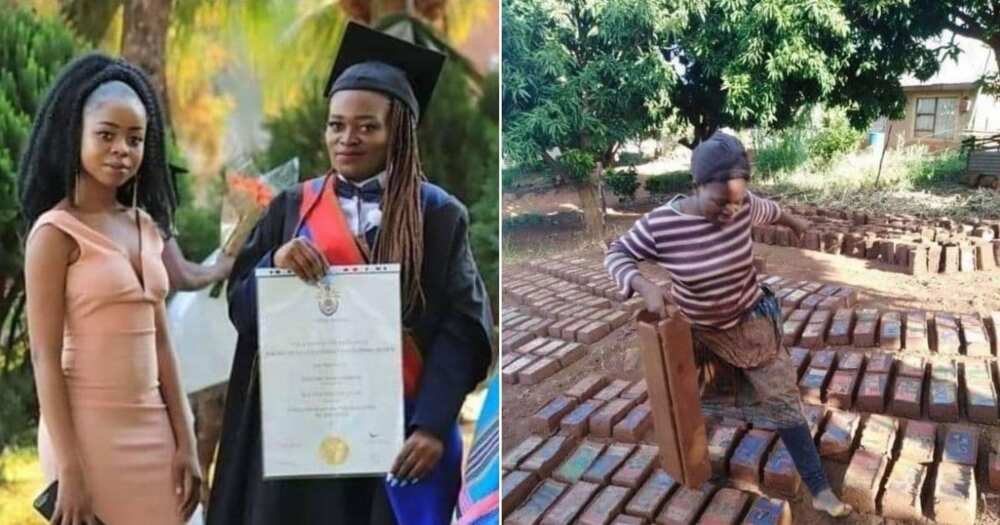 Mudau is joining other powerhouse women who are breaking the glass ceiling to succeed.

Meanwhile, Bioreports earlier reported on Zama Philisiwe Zungu, a lady who went viral in Women’s Month when photos surfaced online showing her building an additional room onto her home.

Photos of Zungu’s handiwork were posted on the viral #ImStaying group and social media users were in awe of her. The 26-year-old, who grew up in Pietermaritzburg, KwaZulu-Natal, was photographed building an extra room onto her existing house.

In an interview recently, she said:

“Growing up both my parents played a very vital role in making sure that I believe in myself and also instilling the thought that nothing is impossible when you put both your mind and effort into it.”

Zungu made the decision to become an engineer in 2014 and her father was a major motivation for her.

“My dad was my inspiration since he is also a builder. Also, I was inspired by the lack of women in this industry, since it was labelled as a man’s job. I took the challenge knowing very well there are quite a number of challenges I’d encounter in a male-dominated career.”