– According to him, he spent seven months living with a friend because he did not have a place to go to

– Sharing photos of his apartment on Twitter, many celebrated his new space with him

A Nigerian man with the Twitter handle @eazy_ibies has finally overcome the shelter challenge he faced for several months.

The man said that due to the money problem he was in, he had to squat with a friend for seven months. Fortune later smiled on him and he rented his own space.

Taking to social media on Tuesday, December 1, @eazy_ibies thanked the Lord for giving him the opportunity to start his life all over again.

After months of suffering, the man said he has still not become “comfortable” with the new change. He shared two photos on the bird app which showed how his sitting room looks.

In place of a wine cabinet, the man decided to make a portable bookshelf that serves as a good foreground to his TV. 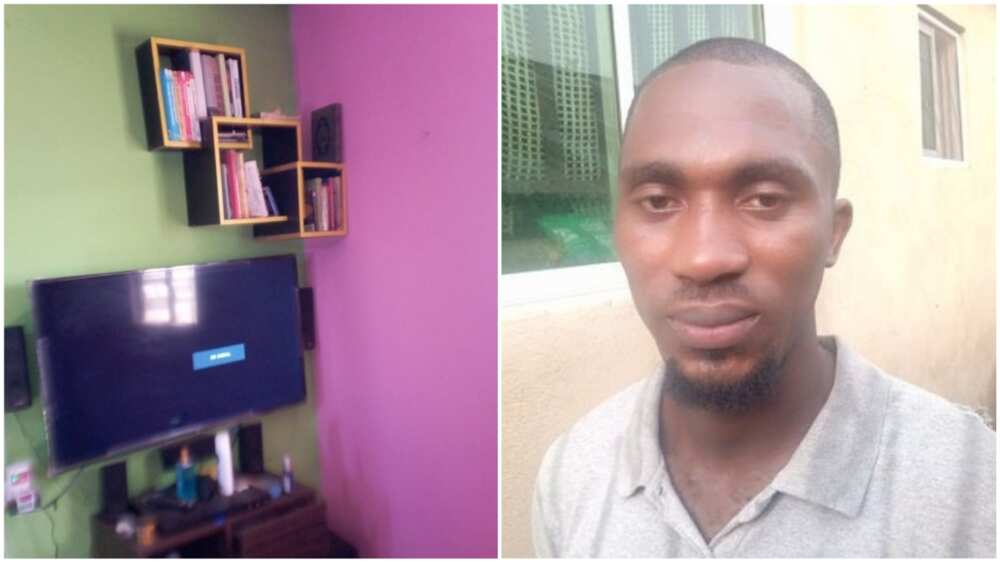 The man expressed happiness at getting his own apartment.
Photo source: @eazy_ibies
Source: Twitter

“After almost 7months of squatting at my friend’s place due to some financial issues.. All I can say is thank you Lord for starting over again. Still trying to be comfortable in this new apartment. Woke up decided to do a bookshelf since money never dey for wine.”

Below are some of the reactions his post got:

“This is nice, when you are thankful for the little things more blessings come your way.”

“Thank God for you. However, having that book shelf on top of the TV could be dangerous, it could fall off one day and cause damage to the TV, I would however suggest that you relocate it to another position.”

“Congratulations and enjoy your new apartment.”

Meanwhile, Bioreports earlier reported that a Nigerian lady with the Twitter handle @lauragaga1_ showed off the fridge she recently bought to show that every win matters.

In a post she made on the platform on Sunday, October 4, the lady was very happy with the household item as she said:

“My own very fridge…thank you Jesus.”

Months after Igbo man became minister of justice in Canada, another man from the east wins big in same country, here’s what he got

Months after Igbo man became minister of justice in Canada, another man from the east wins big in same country, here's what he got