A number of stories trended this week and Bioreports has compiled five of the stories you might not get tired of anytime soon.

1. Nigerian lady travels from Lagos to Benin with motorcycle

In a tweet on Saturday, November 21, Fehintoluwa said she took a solo trip on her power bike from Lagos state to Benin city to and fro in an amazing completion time of six hours.

The lady said that in order not to be discouraged, she never told anyone of her plans before she embarked on the journey.

A Nigerian fine artist, Chubby Onyesoro, wowed social media with his work and people’s reactions are a mix of wonder and praise at his masterpiece.

Onyesoro said he is a 3D pencil artist as he shared one of his many works on Twitter on Saturday, November 21.

Not only did people help him to massively share his post, but they were also stunned by how he was able to pull a drawing that seems to have a life of its own with just a pencil.

3. Teenager who got A1 in seven subjects in WAEC dies

Chisom Chukwuneke, a 17-year-old student who had seven A1 in the 2019 West African Senior School Certificate Examination, died. 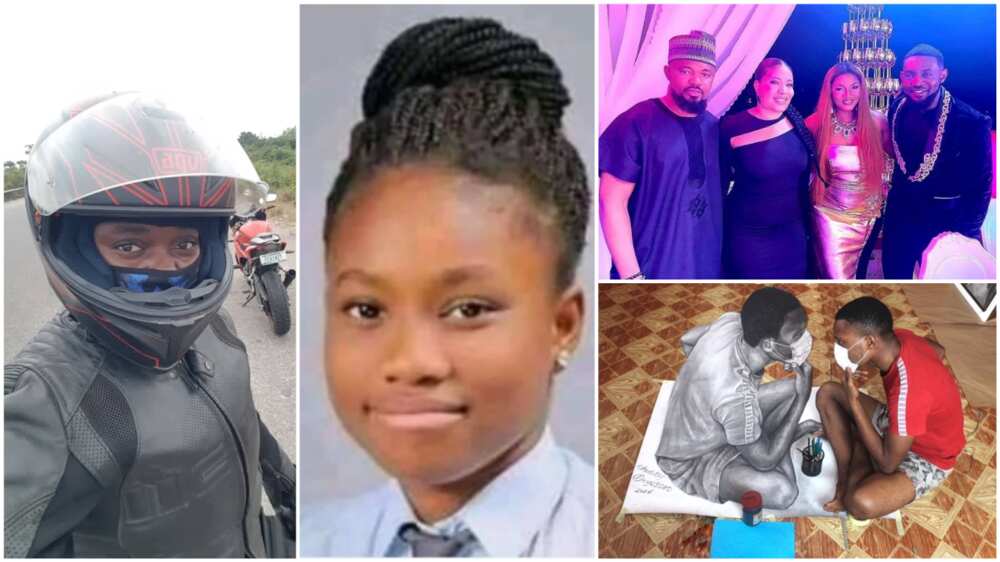 The teenager, who was the best graduating student in her school, won many awards after achieving the feat. Sadly, her life has been cut-short despite having many dreams she wished to achieve.

Nollywood actress Omotola Jalade-Ekeninde no doubt has the strong support of her family members and this is evident in how they show up for her whenever it is needed.

The movie star’s annual business festival, TEFFEST, came to an end in grand style after three days of activities. Omotola also used the opportunity to launch her movie studio.

The club owner has always been known to be a sort of character who also appears to love attention.

Dad and his cute kid become internet sensation as video of them spending quality time together goes viral, here is what he’s teaching the boy