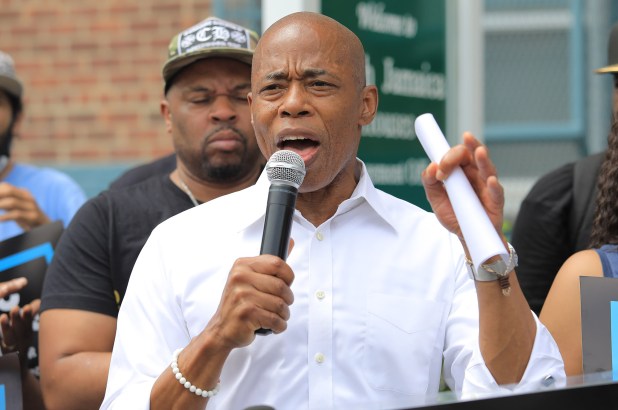 Mayoral candidate Eric Adams is the best choice to save the city.
James Messerschmidt

Today is the most important vote for New Yorkers in a generation. Whom you pick as mayor will determine whether three decades of prosperity and safety will return, or if the dark turn under failed Mayor Bill de Blasio will continue.

Eric Adams is unequivocally the best candidate to save the city. Pick him as your first choice on your ballot.

Younger New Yorkers do not know what rising crime and financial mismanagement did to the city in the ’70s and ’80s. They may not realize the hard work that went into turning things around, how smarter policing under Mayor Rudy Giuliani lowered the murder rate and saved the lives of hundreds of people, mostly African Americans.

It didn’t last. The elimination of bail, the demonizing of the NYPD, the general lack of consequences for disorder — New York has regressed. De Blasio didn’t care; he spouted progressive platitudes and went for a walk. If far-left Maya Wiley is elected, things will only get worse.

De Blasio understood, at least at first, that if New York City isn’t safe, none of this success is possible. He hired Bill Bratton as police commissioner and allowed him to keep driving down crime figures.

We need a fighter who understands this. The Post endorsed Adams at the beginning of May, and we’ve been heartened by his clear and consistent positions on the issues from the start: A hard “no” to the “defund” extremists, and efforts to appease them.

One need only look at the empathy he showed toward the 10-year-old girl who saved her 5-year-old brother from a shocking daylight shooting — and the fact that he put up his own money for a reward — to see what kind of man Adams is.

As a cop for 22 years, Adams understands the crisis, including the need for careful reforms that don’t stop good cops from doing their job. Indeed, he told us “nothing angers me more” than when the entire NYPD gets trash-talked.

Plus, as a former state senator, he has the connections to help get the no-bail law fixed by giving judges the discretion to remand chronic offenders and those who pose a threat to public safety.

He’s also well-positioned to get his former colleagues to lift the cap on charter schools, giving more options to New Yorkers whose local public schools are low-quality. But he’s also determined to improve the regular school system — half of whose students, he angrily notes, don’t meet basic proficiency in reading and math.

And he has the right attitude on the homeless, vowing to make better use of Kendra’s Law to ensure that the most troubled of them get the medications and other help they need.

Adams also understands that the city needs to get back to work and get its offices busy again, and that making the streets and subways safe has to be city government’s top priority to that end.

The choice is clear.

Homeless in Australia: ‘You have to be on...

In Turkey, wildfires leave behind charred homes and...

4-year-old girl in critical condition after being shot...