The policemen were right there! Young man painfully recounts how he was robbed, beaten and officers watched

2 minutes ago by
Adeyinka Odutuyo

– A Nigerian man on Twitter, Kunle, has recounted his harrowing experience around the Ojota area of Lagos

– Kunle also claimed that his assailants threatened to kill him

A young Nigerian man identified as Kunle (@skinnyniggr) on Twitter has taken to the social media platform with a disturbing narration of how he was attacked around the Ojota area of Lagos.

Kunle in his posts disclosed that he was robbed and beaten by his assailants and they left him with nothing.

He said he had to beg for his life because it seemed as if the attackers would have killed him if he didn’t give them all they wanted. 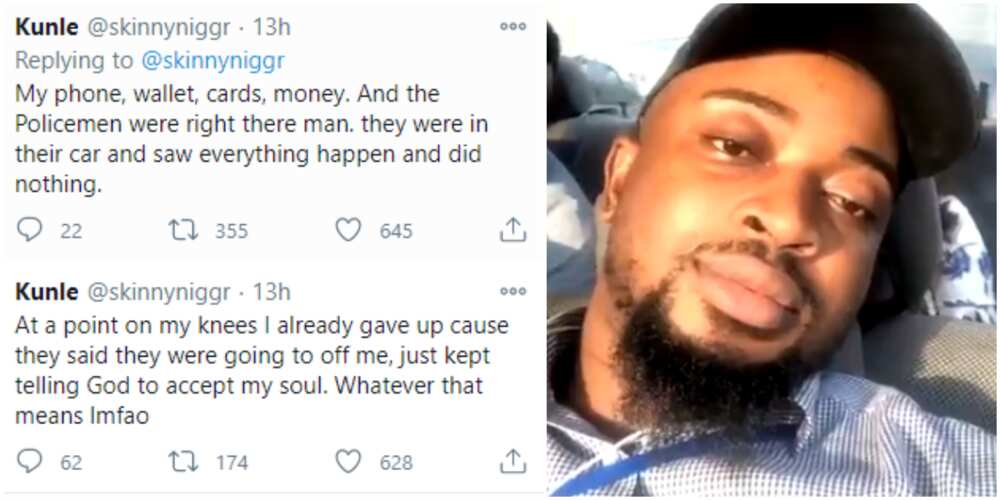 “I got robbed and beaten tonight around Ojota. They literally took everything from me this night. Had to beg for my life cause they really were going to kill me if I didn’t drop everything,” Kunle wrote.

Kunle said his phone, wallet, credit card and money were all forcefully taken from him. However, more disturbing about the narration was his allegation that police officers watched the whole scenario play out without coming to his rescue.

“And the Policemen were right there man. they were in their car and saw everything happen and did nothing.”

In another tweet, Kunle said he was terrified during the encounter and had to go down on his knees praying to God when the attackers threatened to kill him.

See his tweets below:

Kunle’s tweet elicited mixed reactions from social media users on the platform with many briefly sharing their own experiences.

Meanwhile, Bioreports previously reported that the Abiola family recounted their ordeal in the hands of some robbers who invaded their residence.

Tundun Abiola said the family was subjected to torture and harassment. The police in Lagos, however, assured they have arrested some suspects and investigation has commenced.

Will SWAT be more effective than SARS? Nigerians speak | Bioreports

Mum devises a means to make dead mum attend his graduation ceremony; here’s what he did that got social media talking (photo)

Bethenny Frankel’s Holiday Gift Guide Will Win Over Your Girlfriends

Bethenny Frankel's Holiday Gift Guide Will Win Over Your Girlfriends

How we will take Nigeria out of recession, by govt

Recession: Can ECA rescue the economy?