Nigerian forward Victor Osimhen is today Africa’s most expensive footballer following his move to Italian League side Napoli in the summer of 2020.

The 21-year-old was a standout performer during the FIFA U17 World Cup in 2015 after scoring record 10 goals to help the Golden Eaglets win their fifth title in Chile.

He quickly became the toast of every club with Arsenal among the top clubs looking to secure his services, but the youngster decided to move to Germany afterward.

The attacker has also spent time in Belgium and France before becoming the most expensive African star with his move to Italy. 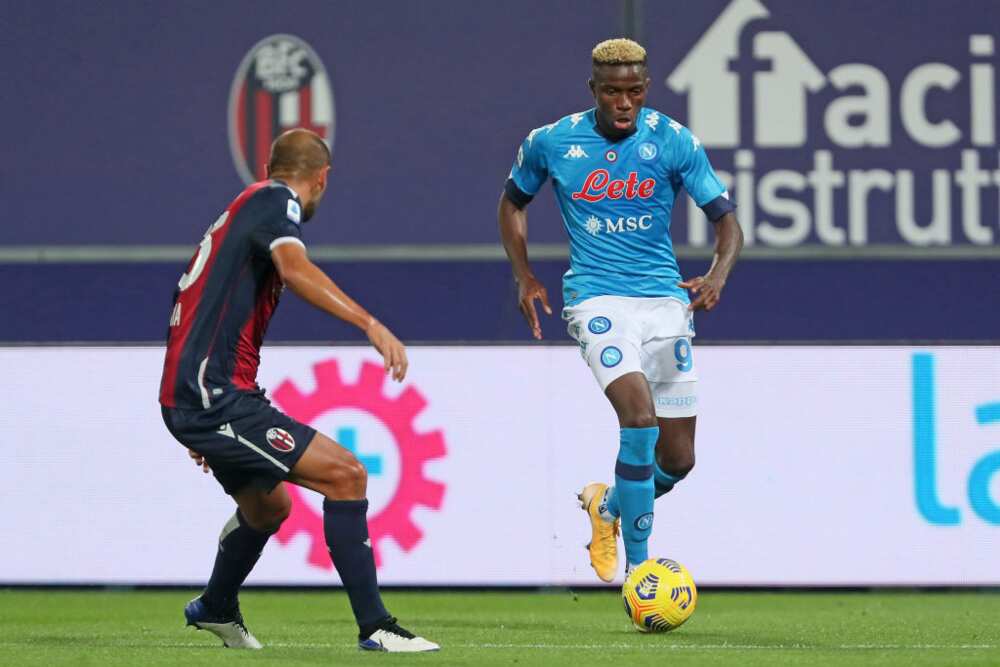 Victor Osimhen making an attacking move for Napoli during their game against Bologna.
Photo by Pietro Mosca/KONTROLAB/LightRocket
Source: Getty Images

Osimhen has now revealed that he did not spend a dime from his earnings after joining the Bundesliga side from Ultimate Strikers in a deal of around €3.50 million in January 2017.

The Super Eagles forward who has now scored twice in six Serie A appearances in his debut season in Italy said on told Bioreports Footballers that:

“When I signed in Wolfsburg, I didn’t buy anything for myself with my bonus, I immediately bought a house in Lagos for my father.

“I gave money to my brothers and sisters and today, everyone is okay in their businesses. It makes me happy to know that they have enough to eat. They always help me and it is normal I want to change their lives.”

Osimhen has not featured for his Italian league side since mid-November over the shoulder injury he suffered while in action for his country in their AFCON qualifier against Sierra Leone.

The club has now confirmed that the youngster is nearing full fitness and maybe returning to action soon.

Bioreports earlier reported that Gernot Rohr has said that his first choice Super Eagles striker Victor Osimhen will learn from his mistake after testing positive for COVID_19.

The Napoli forward was spotted in public without wearing a nose mask and observing the social distancing rules while he was celebrating his 22nd birthday and was fined two weeks’ wages by his club.

Osimhen has taken too social media to apologize to the Naples based side and fans for putting his teammates at risk.

US: Joe Biden appoints another Nigerian into his cabinet

US: Joe Biden appoints another Nigerian into his cabinet