While lots of Nigerians take precaution allowing their kids play with pets, the daughter of Super Eagles star Moses Simon was seen playing with their guard dog alone.

The two-year-old was seen in a photo on her dad’s Instagram story as she held the pet warmly to the amazement of the player’s followers.

Simon was been ruled out of Nigeria’s 2022 Africa Cup of Nations qualifiers against Sierra Leone due to injury concerns.

The 25-year-old lasted about 25 minutes in FC Nantes 3-0 defeat to Paris Saint Germain before the international break.

However, the Super Eagles attacker who is currently recuperating from his setback has now taken time out to be with his wife and daughters. 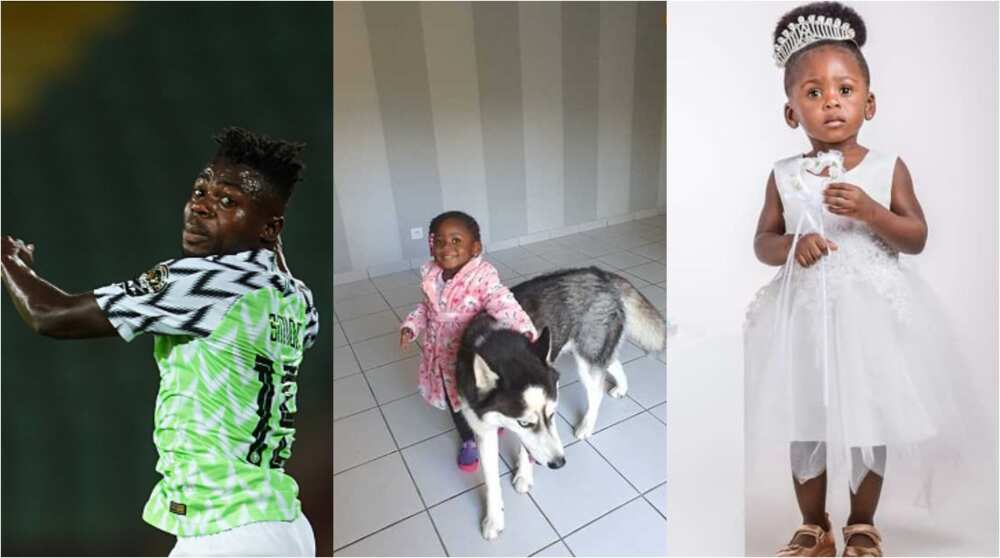 In his latest post on social media, his daughter was seen in a picture having fun-filled time with their dog as she looked to be playing with a ‘little friend’.

Kids are said to be lovers of pets and despite that some of these animals could be harmful, some have been able to become friends with the pets.

Only recently, Super Eagles legend John Obi Mikel took to social media to share adorable photo of himself taking his two daughters for a walk in England with a guard dog.

The former Chelsea star has shown many times on social media that he is a caring father considering the love he has for his two precious daughters.

In the photo that Mikel Obi posted on his official social media page, the midfielder was staying at the back while his two daughters were in the front with the guard dog.

The 21-year-old conceded four goals in Sparta Rotterdam’s 4-1 defeat to SC Heerenveen on the first day of this month.

He has however pushed the disappointment behind him after taking to social media to flaunt what appears to look like a new 2020 Mercedes Benz-AMG GT Coupe car.