– In a video fast going viral, he was seen starting the car

– Reports have it that as today marks the last day of the final exam, he is taking it for a spin

In the viral video on social media, the young JHS 3 student is seen starting and revving his creation and getting it ready for his trip to school.

The video showed the creator of the Lamborghini-like car with bird-like doors in his car and about to give his classmates a ride to school to write their last papers in the ongoing national exam. 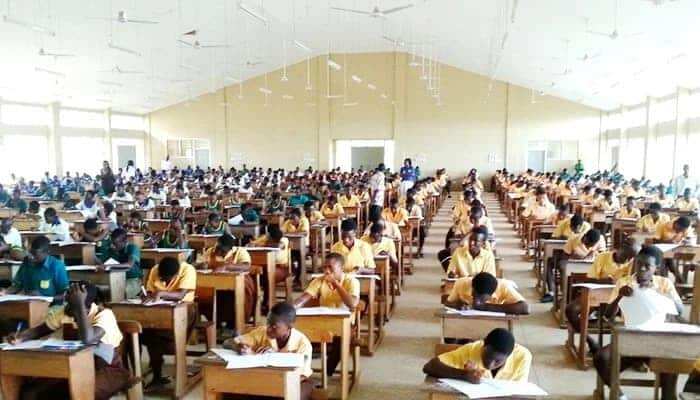 As could be seen in the video, the young man whose name is still not known, looked very confident in his creation and was heard asking his mates to hop on.

The yet-to-be-finished automobile looked as though it had been built from scratch with scrap material.

The body of the car looked quite rusty – giving reverence to the fact that it was built from scraps.

The person who discovered that car and recorded the video for social media appeared quite awed by the creation and could not stop admiring the creation.

The voice of the person recording the video appeared to be a lady and she was heard saying that the young creative had done so well to build something that works.

Meanwhile, Bioreports earlier reported that Oladele Ogbeyemi, a young graduate and serving member of the National Youth Service Corps (NYSC), succeeded in redesigning a Mazda 323 car using scrap metals and other such wastes.

Ogbeyemi, whose profile reads that he graduated from the Yaba College of Technology, a tertiary institution based in Lagos, Nigeria, said he achieved this design during the recent lockdown imposed by the country’s government.

Expressing excitement at being able to complete recreating the car, the NYSC member said the project cost him six months of his allowances as a youth corps member.

“As a present NYSC member, (LA/19C/11514), this project kept me busy during the lockdown. “My inspiration in creating this art piece is as a result of my passion in converting discarded materials into art,” he said.