It’s no secret that it can be a Herculean effort to find decent screen recorder software for Chromebooks. Most online capture tools lock functionality (like recording in native resolution) behind an expensive subscription paywall, so you’d have to pay up just to unlock a basic feature. Google has been working to end your recording woes by adding a native solution for Chrome OS in its big 89 update, but unseekable captures and lackluster video quality made it mostly useless. The good news is that may soon change in a future Chrome OS update.

We recently covered Google’s efforts to add seekable captures by overhauling the native screen recorder’s back end. Alongside this much needed feature are improvements to the capture’s lackluster video quality — that work is behind this commit on the Chromium Gerrit. The code hasn’t merged yet, so we aren’t able to gauge how well it’ll improve the screen recorder, but by reading the commit’s description, it’s clear that this move will finally spell an end to the mediocre recording quality on your Chromebook. 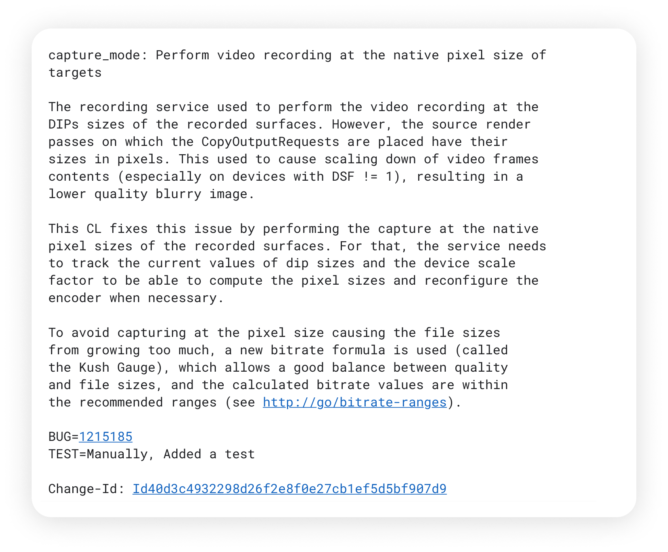 Google is finally doing something about its native recorder’s lackluster video quality.

The work-in-progress code changes the way Chrome OS calculates pixels from within the capture area. Prior to this, the recording service (used to perform the video recording) processed the captured area by its DIP, or density-independent pixels. Because DIP measurements aren’t directly proportional to the actual pixels of the capture, it caused the footage to scale down — resulting in a loss of quality and blurred video frames. With the updated logic, your Chromebook will capture the area at its native pixel size by calculating the values of both the DIP and the device’s scale factor. The trade-off is increased storage consumption — to reduce the that footprint, the recorder will use the Kush Gauge bitrate formula to ensure a good balance between quality and file size.

Improving the screen recorder’s video quality is hugely beneficial for students like myself who use recordings to do homework and study for tests. With the work-at-home culture in full swing thanks to the global pandemic, it’s downright critical to have a recording tool that gets the job done. It’s a bummer that Google still hasn’t implemented a way to support system audio — a necessity when recording lectures on Zoom or Google Meet. Paired with these improvement, Google’s capturing software could finally become a viable tool for class recordings — I just wish they arrived way sooner.

Marsquakes reveal the anatomy of the Red Planet’s interior – Reuters

Everything We Know About the Dead Space Remake...