A young lady with the Twitter handle @WinteeerRoseee has shared a photo of her husband playing video game when she was in labour.

In the photo shared on the social media platform, the new father could be seen playing warzone as a way of relaxing his nerves.

”I hate this dude, mid labor and he playing warzone.’‘ 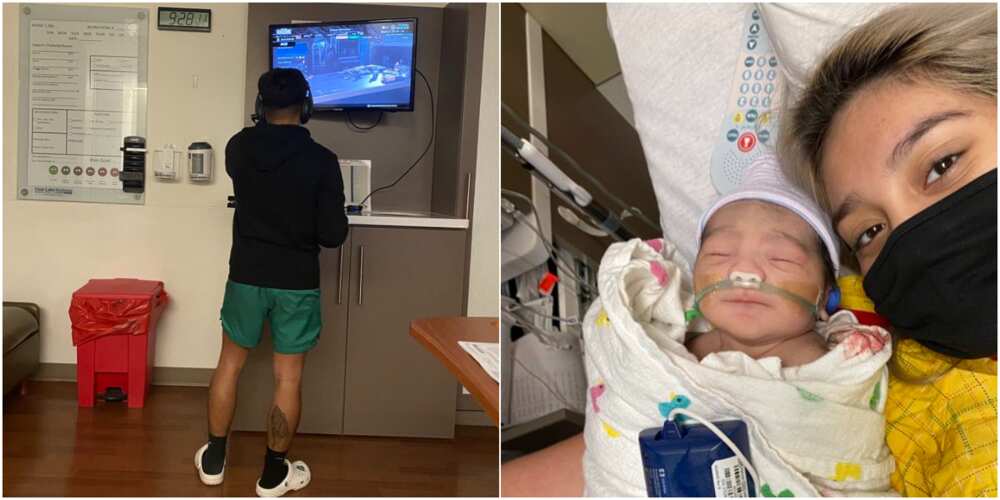 Tweep with the handle @AdoreMy_Essence wrote:

“I would not want someone like that as the father of my child. I don’t care if I am laboring for 3 days. I want you to be present. Even though you can’t feel what I’m feeling, these are the last precious moments of it just being us two. After this our baby will be our priority…

“…well I hope he/she will be his priority but it seems like his priorities are WAYYYY off. Talk to me, if I’m not feeling contractions as yet watch a movie with me, pray with me, distract me through the contractions, encourage me, be present.”

“This is actually stupid & weird asf tho ain’t enough boredom in the world to keep me from spending these special moments catering to the mother of my child & mainly because it’s about to be traumatizing for HER, how is playing COD soothing or helping HER? Niggas wired differentMan shrugging.”

“Playing video games a lot serves as a coping mechanism called escapism. He was probably really stressed out and worried for you and couldn’t help his urge to escape reality for the time. Instead of making him look bad on Twitter maybe try and help him work through it.”

After giving birth to her baby boy, the lady shared photos of herself and the newborn baby.

“Introducing our rainbow baby, born 11/25/2020, so very thankful for you son, you will get better in no time Jair Eduardo.”

In other news, a Nigerian woman who has been married for 16 years without the fruit of the womb has finally been blessed with twins.

The disclosure was made on Instagram by @ms_asoebi who shared adorable photos of the mother and her double gift.

The woman’s story is one out of many inspiring stories of couples who had tried to conceive for years and finally blessed with twins, triplets and quadruplets.