35 seconds ago by
Ibitoye Shittu

– Sergio Aguero, however, believed it was Man City who should have been awarded the thrown in 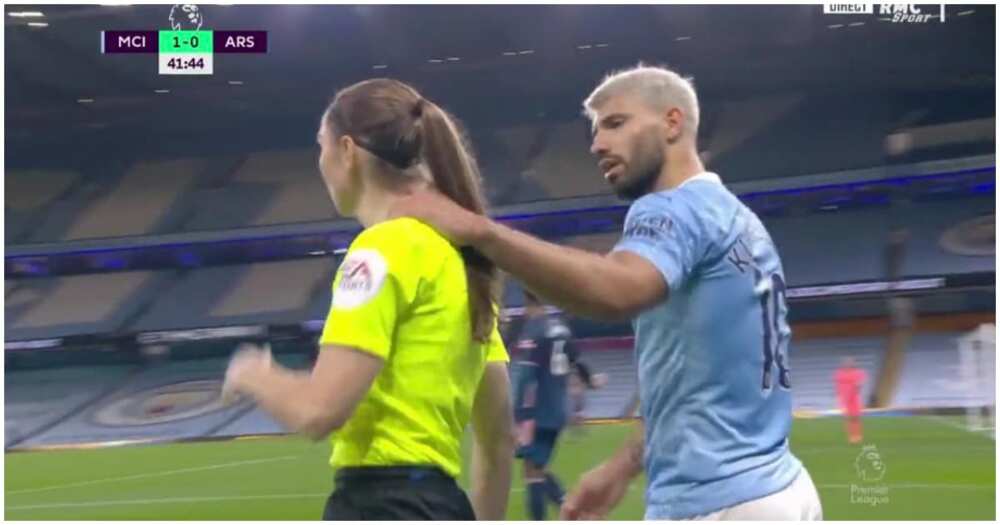 Sergio Aguero had a run-in with assistant referee Sian Massey-Ellis after a decision that went against Man City. Photo: Twitter/@Welbeast.
Source: Twitter

This was after the Argentine was captured on camera grabbing assistant referee Sian Massey-Ellis by the neck in the first half of the match.

Metro UK reports the incident happened after Arsenal were awarded a throw in deep inside their own half, a decision that did not go down well with Aguero.

The striker contended the decision should have gone City’s way instead and briefly made his disapproval of the move known with Massey-Ellis.

A footage capturing the incident shows the Argentina international arguing close to the match official’s face, before he grabbed the top of her shoulder.

Astonishingly, the Man City star was not punished for his actions before he was substituted in the second half. 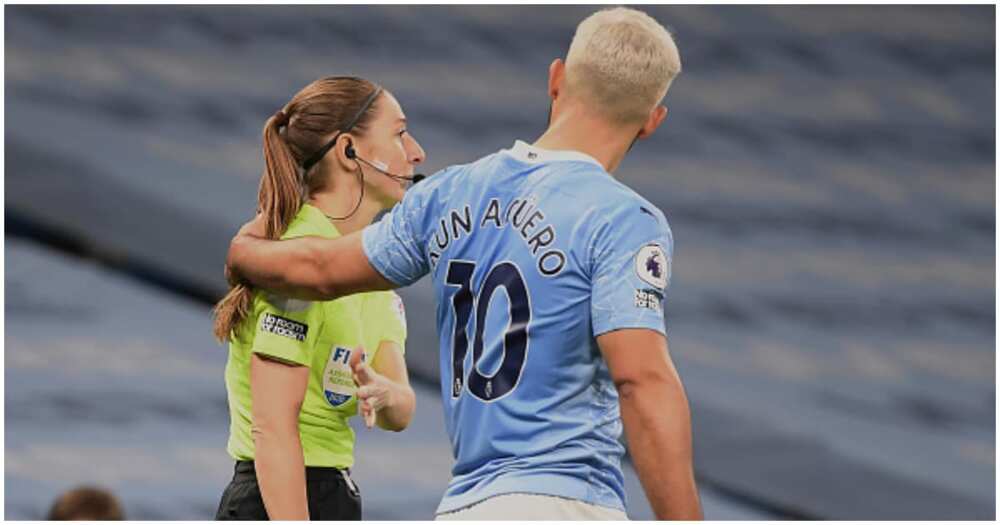 Sergio Aguero was making a return to action after months out through a knee injury. Photo: Getty Images.
Source: Getty Images

This was the 32-year-old’s first appearance for City since his return from a knee injury.

“The Professional Game Match Officials (PGMO) will take a stronger position and action towards unacceptable participant conduct,” a statement from the Premier League reads.

“This will focus on behaviour towards match officials, with the aim of reducing disrespectful conduct such as aggressively challenging decisions or running from distance to confront an official,” the statement adds.

Earlier, Bioreports had reported how Everton on Saturday evening, October 17, maintained their leadership position on the Premier League standings despite forcing Liverpool to a 2-2 draw in their game.

Carlo Ancelotti and his wards will have the VAR to thank in their Premier League encounter against Liverpool as the system ruled out the late goal scored by Jordan Henderson.

Liverpool stars and their fans who watched on television were happy when Henderson scored, but the goal was later disallowed.

See how the Premier League table looks after defeat for Arsenal, draw for Chelsea and wins for Man United and City

By Okodili Ndidi, Abuja The Independent National Electoral Commission (INEC) has postponed the six Senatorial and nine House of Assembly...

I did not order Lekki shootings – Sanwo-Olu