Cristiano Ronaldo and Lionel Messi are great players but the Portuguese star still has an upper hand over his rival, according to Bayer Leverkusen striker Leon Bailey.

The pair have dominated football in the last 15 years and have won 11 Ballon d’Or awards between them in the last 13 years.

Jamaican international Bailey has taken sides with Ronaldo for making an impact with Man United, Real Madrid and Juventus. 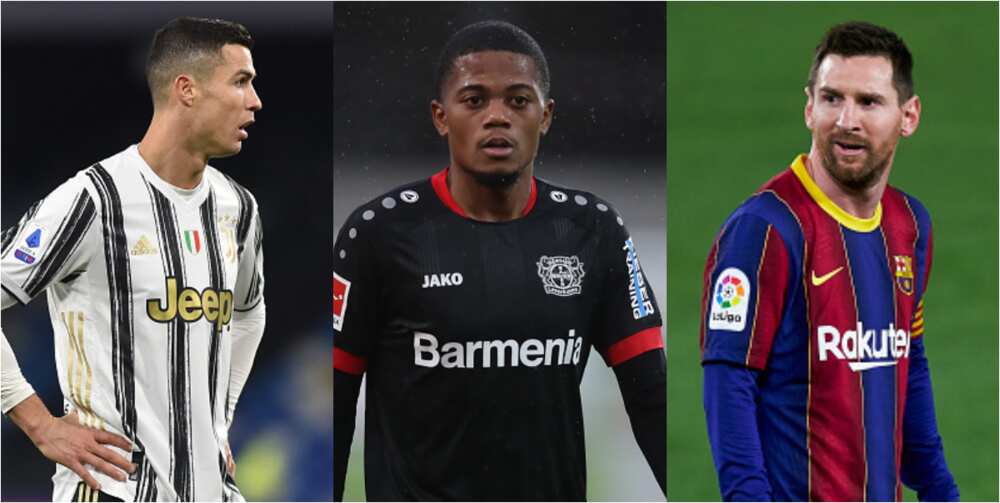 The 23-year-old clearly respects Messi’s talent ahead of Ronaldo but rates the Juventus striker higher because of his successful spells with different spells.

Bailey was quoted by Give Me Sport:

“I think [Lionel] Messi has been at one club for too long.

“The big difference between Cristiano Ronaldo and Messi is Ronaldo has done great things in different teams and that’s what makes him great.

“Obviously they are two great players but Ronaldo will always have that upper hand.”

“I believe Messi is more talented than Ronaldo, but when it comes to more success, I would give that to Ronaldo 100 times.”

Bailey has been good scoring form this season, with ten goals in 27 appearances for Bayer Leverkusen this term.

His team are currently occupying fifth position on the Bundesliga table behind Wolfsburg, Frankfurt, Leipzig and Bayern Munich.

Meanwhile, Bioreports had earlier reported that Lionel Messi helped Barcelona to a 5-1 win over Deportivo Alaves at the Camp Nou as the Argentine equalled Cristiano Ronaldo 573 goals in open play.

The Juventus striker might be the highest goalscorer in the history of football but Messi’s brace against the visiting side matched the Portuguese’s feat.

The 33-year-old produced a five-star performance and he was also instrumental when he came in as a substitute in Barca’s 3-2 win over Real Betis.