– An NYSC member serving in Bauchi state, Leche Winfred Maagawa, has built 50 desks and chairs for less privileged students who sit on the floor to learn

Perhaps more than creating a sense of unity, the compulsory one-year service programme is also a way to affect humanity more in places one would not have been to.

In a Twitter post on Saturday, September 19, the NYSC corps member posted that she is a 2019 batch C member who is serving in Bauchi state.

She said she saw that children sit on the floor to learn in a government school in the state and to come to their aid, she had to make 50 desks for them.

She attached four different pictures to her tweet. The first frame shows the student learning as that sat on the bare floor, while other pictures showed her posing with the desk.

What makes her pieces of furniture really different was that she was creative enough to upcycle bike tyres, paint them into reds, greens, and yellows and convert into sitting pads on wooden chairs.

Maaga’s tweet on the micro-messaging platform has since gone viral as it drew positive comments from many. 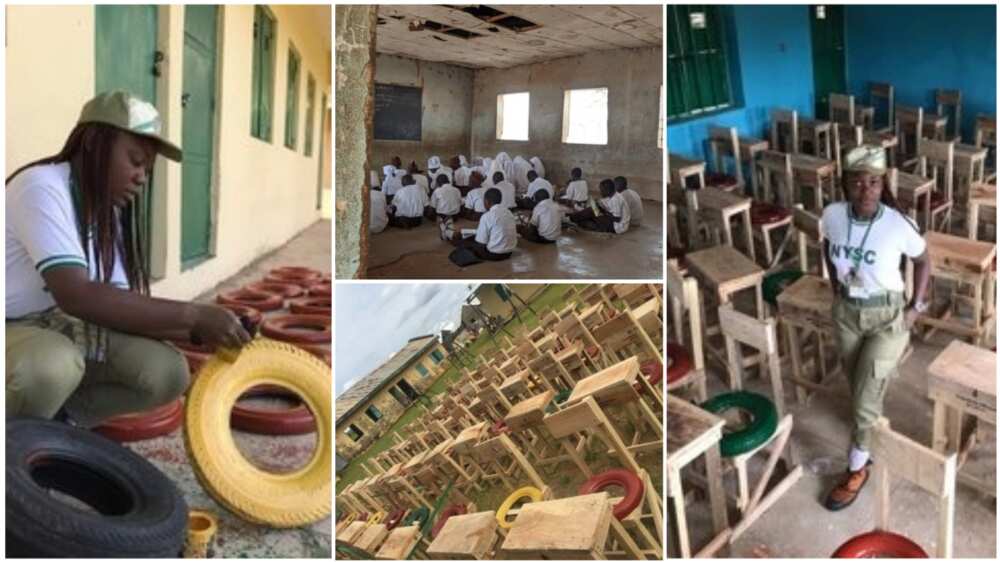 A collage showing the students on the floor and the new desks and chairs the corps made. Photo source: Twitter/LecheWinfred Maagawa
Source: Twitter

Read the reactions it got below:

When some asked the NYSC member how comfortable the tyres are as pads, she said she tested it out with a prototype before going into mass production.

More praises for her work below:

She provided the name of the community here:

Meanwhile, Bioreports earlier reported that an ex-corps member, Iherizie Chimechefulam Justice, said he used his NYSC allowance to get wheelchairs for people with physical disability during his service year.

Justice who graduated from the Federal University of Technology, Owerri, finished his one-year compulsory service in Akwa Ibom a year ago in 2019. He said that he always saw the disabled men on his way to his Community Development Service.

He added that he bought them the chairs as a way to thank God for how he kept him during his university days and NYSC in the state.