– Nigerian senator, Abiola Ajimobi died on June 25, 2020, as a result of complications from COVID-19

Nigerian senator and former governor of Oyo state, Abiola Ajimobi, was one of the high-profile casualties of the coronavirus pandemic which was raging the world.

The politician finally gave in to the virus as he died on June 25, 2020, due to complications from COVID-19.

The senator’s demise obviously touched many people especially his family members who tried their best to make his stay in his grave as comfortable as they could.

Just recently, a video made the rounds on social media of where the politician was finally laid to rest.

Ajimobi was given a befitting place to spend his final days. In the short video, it could be seen that his burial ground was a fully furnished and air-conditioned room. The room was also said to have uninterrupted power supply. Comfortable and expensive looking chairs were also spotted in corners of the well-lit room. 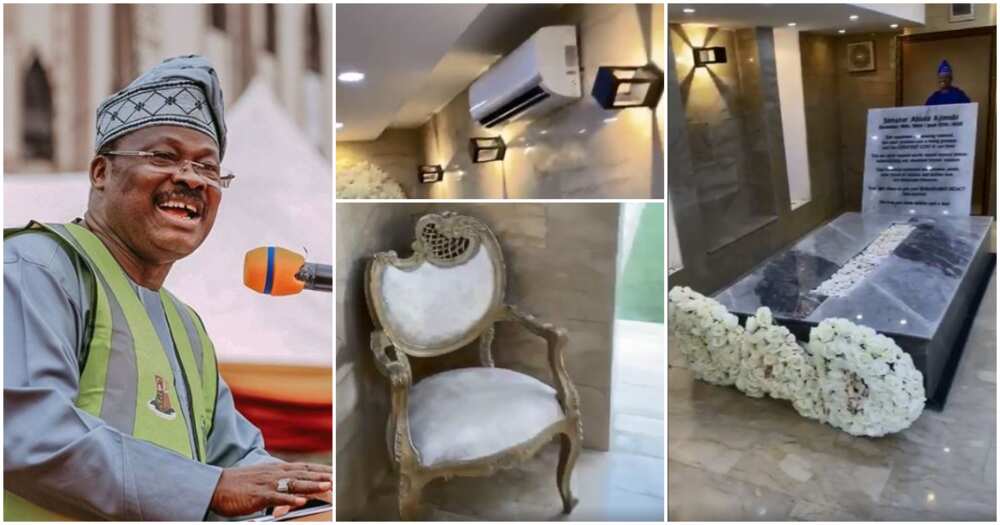 A number of Nigerians had mixed reactions to the late politician’s burial site. Read some comments below:

In video: Nengi admits she really likes Ozo, maintains she never led him on in the house

Oyedeji Kayode: I’m trying to understand the motive. Have they created a relaxation point around his tomb where they can connect to his memory and, may be, his spirit (if his spirit will ever dwell there)? An inviting tourist spot? Or they think the dead can actually take pleasure in the luxury of the living? If this is just a show of money and wealth, then vanity has no limit as well as the extent the mind of a man can conceive vain glory.

Olurotimi Anifowose: A family has chosen how they want to honour their patriarch in death…and I do not see anything wrong in this. Yes,he was a public figure but we should be mindful that he belonged to a family first. He was buried…just his tomb was made up to the taste of his family.

Dammie Lola: Why do I feel this is beautiful anyways …. I will take good Care my parents while alive and still do something more than this for them in death. I didn’t see anything wrong there, they can always go there seat and receive ac and refresh their mind especially when they are going through hard time. Long life to the children.

In other news, Bioreports reported that a heartbroken man died about 16 hours after he lost his wife of 52 years.

Paul Worsley who was 75 years old suffered a heart attack barely a day after his 76-year-old wife breathed her last.

Abba Kyari, Ajimobi, Osinowo, 5 other VIPs who have died from Covid-19 | Bioreports

In Osun, Transporter In Court For Alleged Manslaughter

Why Ubani withdrew suit against Malami