See the expensive Porsche this pregnant woman got from her husband as ‘push present’, this was how she reacted (video)

– A beautiful woman, Kimi K, and her partner are set to become parents in only a couple of days

– In celebration of the upcoming birth of their daughter, the proud dad decided to buy his bae a ‘push present’

– Instead of a ring or flowers, the man splashed a lot of money on a Porsche SUV

Now, while we can totally get behind the trend, some of the women are making us jealous with the lavish ‘push presents’ they receive.

A beautiful designer and entrepreneur, Kimi K, took to her Twitter page on Monday, September 14, to show off her luxury pre-birth gift.

Kimi shared a video showing her standing in front of a Porsche SUV. The proud mama-to-be captioned the post:

“Push present. Our daughter is due in a few days so daddy got me a mommy SUV.” 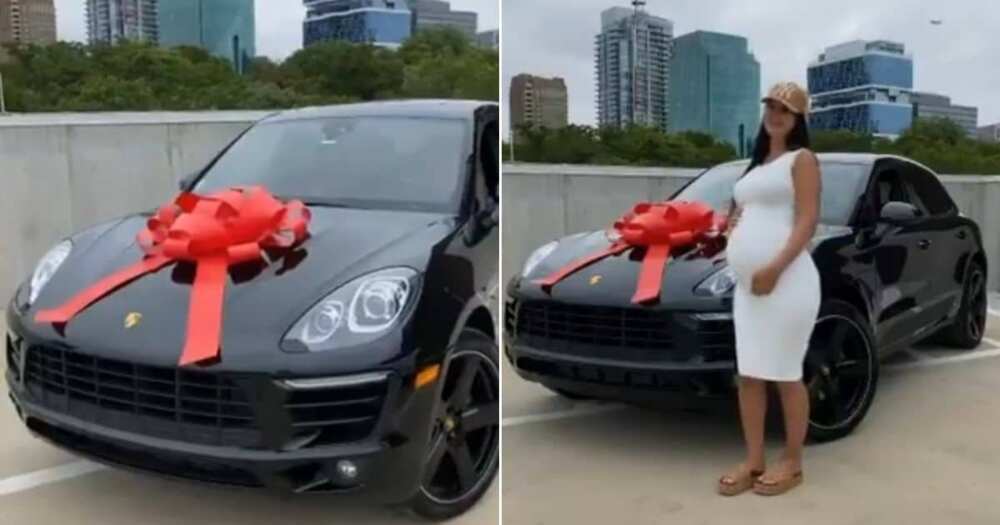 Designer Kimi K showed off her expensive push present on Twitter and she had tweeps green with envy. Photo: @KimiKouture / Twitter.
.

The video gathered over 728 000 likes by the time of publishing and tweeps were in awe of the lavish gift. Understandably, some were even a bit jealous.

“This is beautiful, and congrats to you all. However guys let’s be honest, not all of us can buy push presents.”

“Where you found your man? Asking for a friend.”

“Oh wow the children of God are getting push presents, must be nice…”

“Where my push presents?”

Meanwhile, Bioreports earlier reported that a pregnant woman with the Twitter handle @Jeniferflee painted how wonderful living in love could be when she shared on Sunday, August 23, what her husband did for her.

Jenifer said just when she was feeling unwell, her husband went out and got her the best ‘medicine’ ever; a brand new Benz.

In the picture she shared on the micro-messaging platform, she could be seen in a lovely pose with her husband as they stood in front of the new whip.

Her post got mixed reactions on Twitter as people expressed joy at the gift and those who could not tuck in their envy showed it too.