See how young man painted gas tank to look like big animal, this may scare people at night (photos)

– The 3D work of a 33-year-old French artist, Tom Bragado Blanco, has been the centre of great discourse on social media

Photos of works by a French artist, Tom Bragado Blanco, have resurfaced on Twitter and their reception has been amazing so far.

A Twitter user Lola Okunrin with the handle @lollypeezle shared the works of the 33-year-old artist which showed the greatness of 3D painting.

One of the pieces that caught attention was the life-like painting of a cat on a gas tank. A first casual look at the painting may mistake it for an actual cat with the way the colours and shades blended well with the environment.

See the tweets below:

Many were in great awe as they asked how he was able to achieve such ‘realness’ by just applying colours on a still surface. 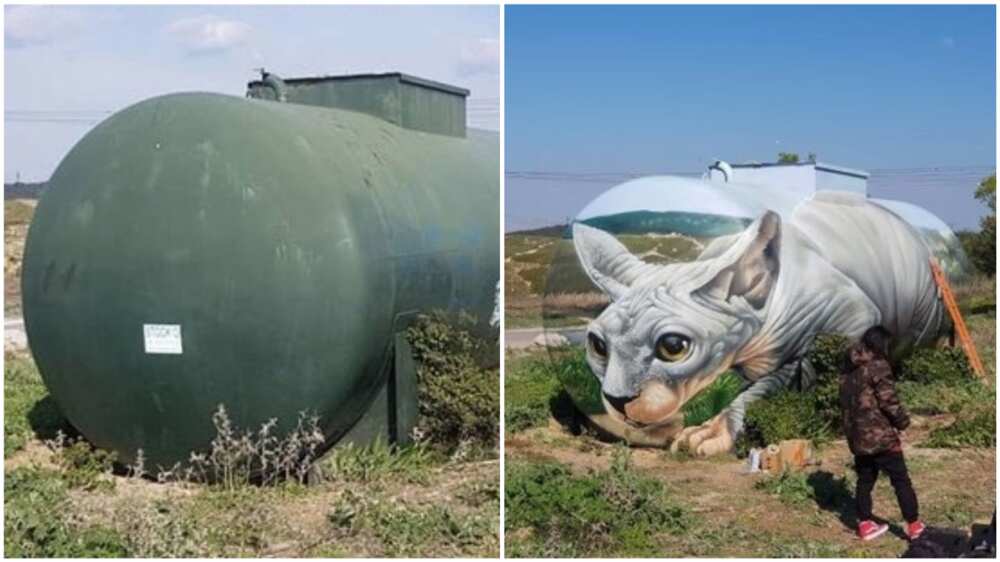 Many people wondered what would happen if the 3D painting is sighted at night.
Photo source: @lollypeezle
Source: Twitter

Below are some of the reactions the photos got on Twitter:

“I am interested in guys that can do this in Nigeria. Please reach out. Thanks.”

“Surely gonna run away in the night when I see this.”

“If your headlamps hit this at night n you shtaank, it’s over with.”

“Baba God wetin be my own talent abeg Disappointed but relieved face.”

“This painting go cause accident o.”

Meanwhile, Bioreports earlier reported that a Nigerian fine artist, Chubby Onyesoro, also wowed social media with his work and people’s reactions are a mix of wonder and praise at his masterpiece.

Onyesoro said that he is a 3D pencil artist as he shared one of his many works on Twitter on Saturday, November 21.

Not only did people help him to massively share his post, but they were also stunned by how he was able to pull a drawing that seems to have a life of its own with just a pencil.

The Nigerian artist shared four pictures that captured the different moments of the drawing process. In one of the photos, the model sat in front of the finished work to show how well detailed the piece is.