– In proposing to a lady, a young corps member pretended he was having a serious medical condition, sending the lady into panic

– Just as the pretty lady was all confused, the young man brought a ring and proposed to her

A young Nigerian man has taken public proposals to the next level with what he pulled off as he asked for a beautiful young lady’s hands in marriage.

Both members of the National Youth Service Corps (NYSC), the man pretended he was about to faint from a serious stomach ache.

His performance initially threw the lady into confusion as she became fidgety, calling for help around and asking people to stop filming but help her lover from crashing. 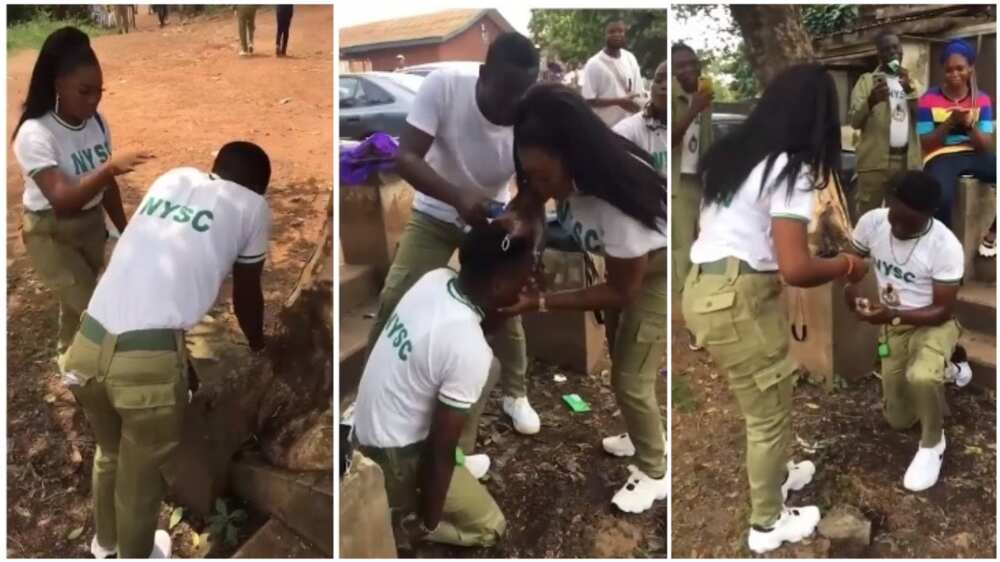 In a video that has since gone viral on social media, just as another person came in with water to soothe him, the lover boy got a ring out of his pocket and presented it to the lady.

The NYSC member was stunned as she covered her mouth with both hands in utter amazement. People screamed for the lady to say yes.

“Hehehehe. Chee. Should we tell them? Or I should mind my business?”

“I am truly happy I saw this! Sooooo beautiful to watch! Sooo awesome, congratulations to them and I pray God grant them the blessings only him can give. Amen.”

“Love is a beautiful thing…may we meet someone who will love us even beyond our expectations.”

“Eya. She put aside the kpalee for the boy….. Love is a beautiful thing when you find the one you love.”

Meanwhile, Bioreports earlier reported that two corps members who met at the NYSC camp and were set to get married.

Mohammed Alhaji-Musa met Hauwa Yahaya-Bagudu during the compulsory three weeks camp and they got attracted to each other before starting their relationship.

Mohammed explained during the interview that he met Hauwa when they were on kitchen duty at the camp. He said that he fell in love with her after noticing her kindness and respect to people.

“I was initially attracted by her way of life, kindness and respect to people which I noticed during our stay in camp, therefore I really fall in love with her.”

Where to Buy Beyoncé’s Ivy Park x Adidas Drip 2 Collection Before It Sells Out!

Where to Buy Beyoncé's Ivy Park x Adidas Drip 2 Collection Before It Sells Out!