See how this young lady looks like a tiger after doing makeup on her face, Nigerians react, ask hot questions (photos)

– The said she closed her eyes when painting the eyeballs of the animal, adding the whole work was done in three hours

A Nigerian makeup artist known as Simi has taken the whole Twitter by storm after showcasing the work she made on herself.

In a tweet she made on Tuesday, January 12, the lady said it took jer three hours to make her face look like a tiger.

Simi went ahead to tell those who may doubt her that what she posted was not done with a filter but through makeup.

Her tweet quickly went viral. At the time of writing this report, her post has over 47,000 likes with thousands of people talking about her skill.

Below are some of the reactions her post got:

“Pls come and do this for my wife she needs to rock this on our wedding day how much is your pay?”

“Wow. While some of us have to invoke the spirits for ordinary eyeliner.” 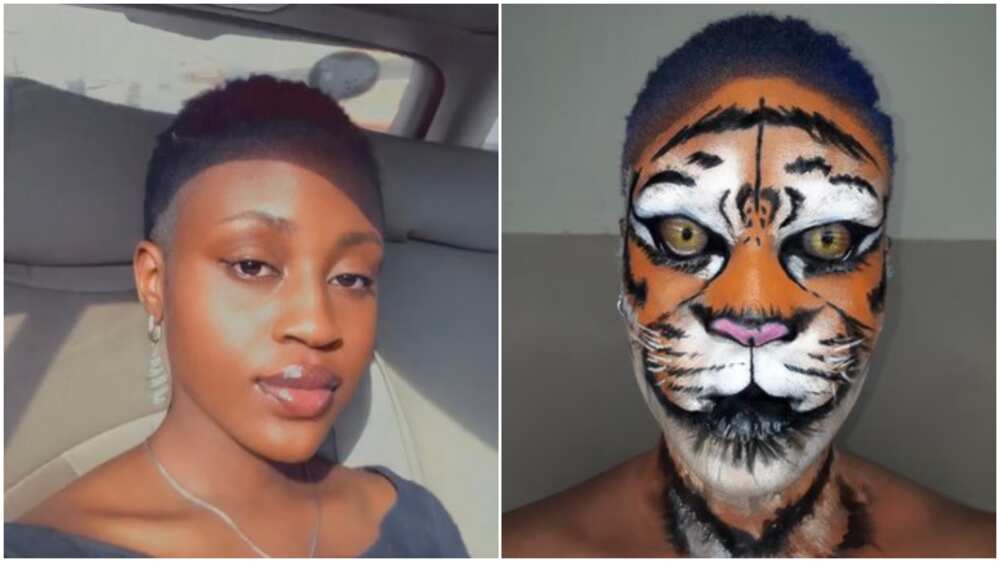 The makeup artist said that it took her three hours to get the task done.
Photo source: @normasfx
Source: Twitter

“This looks like Snapchat to me oo. Cos how you take do the eyeballs?”

“Closed my eyes and painted the eyeballs on.”

“Why am I seriously trying to look for your eyes?”

“They’re closed, she painted on them… She’s really good.”

Meanwhile, Bioreports earlier reported that another talented makeup artist, Richard Jane, showed off how good she really is in the art.

On Facebook, she showcased how she did an imitation of President Muhammadu Buhari. For the creation, she added a cap to make it look so real.

The same several months after caught the attention of members of the internet community with her work of imitation as she painted her face to look like Ramsey Noah.

Richard posted photos that captured the transformation process on her Instagram page. Sharing the post, she wrote:

“Another imitation makeup by yours truly. Who do you see? Leggo”