See how joyful this black woman was as white boyfriend finally asked her to marry him (video, photos)

– An American actress, Gabby Sidibe, shared that she got proposed to by her boyfriend, Brandon Frankel

A popular TV personality, Gabby Sidibe, has said yes to the marriage proposal from a white man, Brandon Frankel, who she said is her best friend.

In an Instagram post on Tuesday, November 24, she said that it is quite ‘weird’ that people have been thinking they were already a married couple.

After the proposal, Gabby said that she can now hold her friend forever, calling him the funniest man she has ever met. 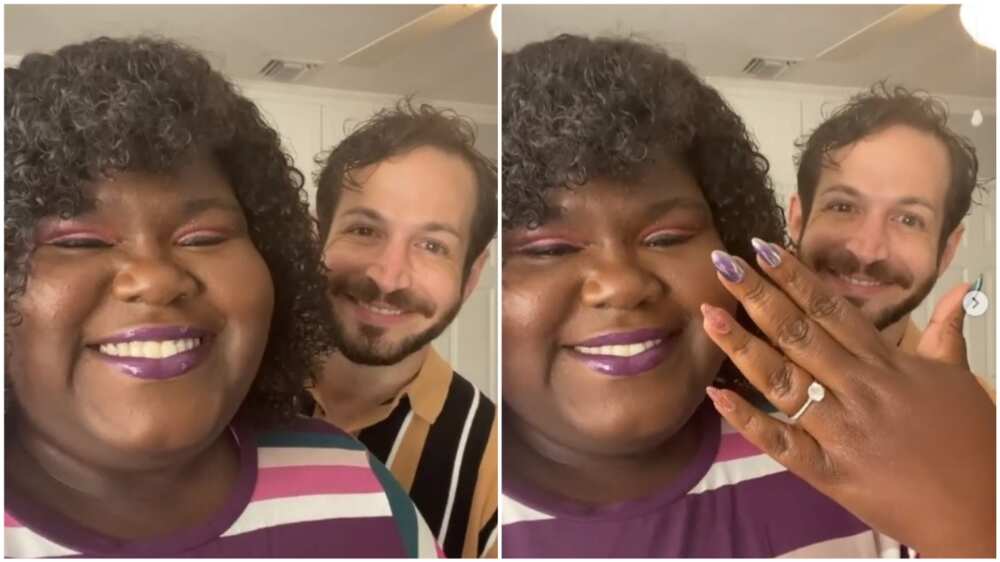 Gabby said whenever she is out of place and stressed, Brandon always comes to her rescue, doing whatever he can to make things easy.

“He is the partner I thought I was too independent to need. I’ve learned so much about myself through him and I feel grateful and excited to learn more about the entire world with him by my side…”

Below are some of the comments her post got:

“Yay!!! This is so beautiful. So happy for you. Congratulations!! Thanks for spreading joy.”

“Awe Congrats hun! You deserve all the happiness in the world!”

“GAHHH!!!! Oh. My. Gawd!!!! The Kitties must be ecstatic. This is the best thing in the world! Congrats to you Both!”

Meanwhile, Bioreports earlier reported that a Nigerian man identified with the handle @Kaylechi_ on Twitter is over the moon as his older white lover accepted his proposal for marriage.

In a post he made on the platform on Monday, November 23, the man said that the love they have for each other is real.

The attached photos showed the woman visibly happy as she held flowers. A part of the room floor they were in was decorated with red balloons to create an atmosphere of love.

Social media reacts as man shares super special moment with his mum, swings her like a young lady in adorable video